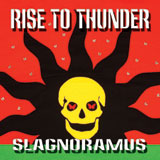 Psychedelic Warlords Rise To Thunder ride across a deep purple sky the colour of an inflamed bell end, on great winged lizard steeds, with rasping tongues and eyes of jade flame, high above the blackened ruin of the Potteries and out over the impenetrable dark of the Staffordshire moors, looking for warm virgin meat. Hot Peyote foams from their scabrous gobs and flecks their hoary beards. A typical night out for Al and the lads, then its back to Hanley for a prawn balti.

“Ya know what I want to do right now, is just get stoned outta my mind”. Thus opens this masterpiece of homegrown stoner rock, with a sample from “Enter The Ninja”, an obscure 1981 martial arts movie starring Franco Nero and Susan George (Thanks to Al for pointing this one out to me). “Slagnoramus” is basically one 35 minute space jam composed of four individually labelled segments. This is the first release, hopefully of many, on the newly established Negatropolis Records, a label that aims to represent the insane wealth of maverick talent in the Stoke area that is typified by the Space Witch/RTT collective.

Opener ‘The Shrowd’ cuts in with the kind of brazen driving mutant rock ‘n’ roll riff that we have quickly come to expect from RTT. The twin guitars of Munger and Dan (also of the semi-legendary Charger) are pure molten magick, striking and stuttering over the concrete solidity of Peet’s fluid undulating bass lines and Muff’s savagely whacked skins. Head thumping riff power melts into beautifully drowsy psychedelia, as the guitars bend and warp like Gilmour meets Sleep. Another spot on sample from “Enter The Ninja” floats underneath, and the whole effect is as mellow as a warm midsummer meadow on a gentle hillside, and as psychotropic as Syd Barrett’s breakfast circa 1967.

‘Hooversith’ kicks off with a great sample (culled almost unbelievably from ‘Close Encounters Of The Third Kind’) and then squalls and rages with a chunky power riff that would not be out of place on a classic eighties thrash metal album. Blaster Of Muppets – Reign In Sludge. Riffing spawns further riffing, like a mad fucking riff machine, and the track slows to allow a pompous metallic majesty that strides out and surveys humankind with a cold red eye before destroying everything in an apocalypse of feedback. Big arching solos stretch out and glide, and in a mad yet not so implausible kind of way, RTT strike me as the perfect American tripped out desert rock act, even though they’re from Stoke, which has kilns instead of cacti, and oatcakes instead of tortillas.

‘Warlords Of Psychopia’ is classic stoner sludge that also manages to sound like stunning Slint-esque post rock too, as ice cold guitar notes are picked out and placed with a certain deft minimalism, and the music starts to sound angular, disjointed and faintly…mathematical. Right brain, left brain.

‘inside The Hive’ sticks out another fabulous note bending stick insect of a riff, that creeps and scuttles across the consciousness like a guilty memory. Munger’s warped riffs have an almost surf rock feel, like Dick Dale gene-spliced with Matt Pike. RTT reach a furious and bellicose eargasm towards the end, blurred pseudo hardcore thrash crashing and buzzing into the final long slow shimmering chord strokes and wild fx soaked super noodlings of the brain twitching climax of this grand inner journey.

RTT are an instrumental cornucopia of sludge soaked psychedelic rock that are fucking miles more stylish and unique than the majority of the competition. This is another superb blast of quirky uber stoned spacecore that is executed with the very finest musicianship and drenched in vibrations from planet hemp. Paranoia, anxiety, psychosis, depression, euphoria, sexual fantasy, infantile retreat from straight society expectation…it’s all here, in 35 glorious minutes. I won’t mention the cover. If there was any justice in the world, it would be designed by Roger Dean and drawn by Scott Stearns. Anyway…Stick it on brothers and sisters, tune in, fuck up. See you on the other side. 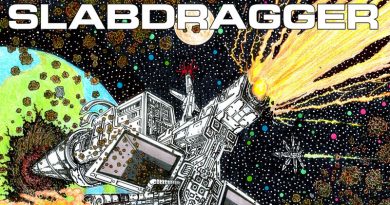 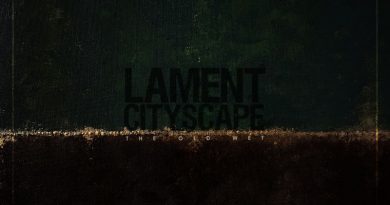