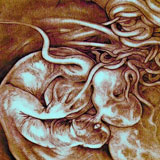 All the way from Chennai, India, Rat King is the twisted brain-wrong of Deepak Raghu and Murari Vasudevan and is quite a departure from the kind of thing we usually cover here at t’Shaman. You’ll find no trace of Stoner Rock, Sludge or Doom Metal here, instead Rat King give us a highly rhythmic, occasionally violent, and often unsettling soundtrack to an imaginary movie.

To these ears, ‘Larva’ evokes similar tones, moods and resonances as Shoji Yamashiro & Geinoh Yamashirogumi’s soundtrack to Akira and the literally metallic hissing and pounding of Chu Ishigawa’s Tetsuo – The Iron Man score, along with overtones of The Rhythm Devils work on Apocalypse Now and the claustrophobically intense work of Japanese one-man band Dissecting Table. See what I mean? Not yer typical Shamanic fare at all.

The dominant sounds for the vast majority of ‘Larva’ are the drums of Deepak Raghu, heavily treated clean guitar sounds, violin and general atmospheric sound trickery. What could easily come across as skeletal and sparse is given a great deal of depth and sheen by the immaculate production and general compositional skill of Raghu and Vasudevan.

From the tabla and percussion-lead opener, ‘Egg’, the atmosphere is set and the expansive yet minimalist sound palette is thrust firmly to the fore. The machine-gun hammering, creepy atmospherics and rich violin of ‘Hour Of The World’ serve as some kind of blueprint for the album as a whole, blocks of near-silence being interrupted by furious percussion and dramatic swathes of overwhelming sound. Elsewhere, as in ‘The Duel’ and ‘Spiracle’, the deep-space ambience reaches near-Ligeti proportions, as encroaching dread looms upon the listener. ‘The Wake’ and ‘Tranquillity Lane’ are driven by bonecrunching jackhammer drums and really amp up the drama with some heavily orchestrated sections juxtaposed against quieter, more contemplative passages, particularly in the case of ‘Tranquillity Lane’, which tails off into an eerie abyss of deep blackness before swimming back into earshot again with a wonderfully mournful coda. This elegiac feel carries through ‘Smorgasbord’, with its dramatic strings and double-bass drumming, and finds its zenith in closer ‘Vapour’, a melodiously downbeat number featuring pizzicato strings, strident acoustic guitar and sounds for all the world like David Arnold channelling Lalo Schifrin.

Rat King deliver a stunningly cinematic panorama of sound, here on ‘Larva’, beautifully arranged and beautifully recorded. I’m hearing a lot of high-quality music coming out of India of late, and judging by the amount of pies that Deepak Raghu has a finger in, I’ll be hearing a lot MORE.

I wholeheartedly recommend ‘Larva’ to anyone with an adventurous musical palette, and advise that you keep an eye on the Indian underground music scene for the foreseeable future, something tells me there is a lot of interest brewing therein and you don’t want to miss out, do you?