During the overwhelming isolation of lockdowns, I imagine many people to have baked cakes. And if I was going to decide upon a recipe for this dense, rich and lavish torte, I would include ingredients such as, Gnaw their tongues, Uboa and even a pinch of Fantomas’s album Delirium Cordia. However, to find a neat bundle of band references would not do any justice to the sumptuous palette of flavours Quarantine’s The Perception Of Pain has on offer, so alternatively I’ll use a theatrical analogy – tragedy.

The album has been written during and draws upon experiences of the pandemic. The theatres of tragedy, both the performance theatre and the hospital theatre can be heard on the album, drawing the curtains wide open to reveal a very dark place. The encounter opens with sounds one would imagine hearing in a hospital, they form an illusionary and incoherent machine of pain filled resonance. Following, is the introduction of heavy dramatic accents accompanied by vocals which traverse the dense soundscape with tortured screams leading on to a softer and poetic delivery, becoming autobiographical sounding, and presenting what feels like the beginning of a spoken narrative.

An ongoing theme represented in most major art forms is death and mortality. Frailty, bewilderment and, the incomprehension of the human condition; who and what is our cultural definition, it’s the western civilisations search for the self. A philosophy of tragedy cries out from within the density of this album, although the middle tracks are grounded by the inclusion of an abrasive beat, a rhythm which gives the music a foundation to keep us rooted in the physicality of what it is to be human. It’s a great use of rhythm and riff, as without them the pieces may be too esoteric, and the tenuous thread that keeps the listener in tow may be severed.

Quarantine‘s album sounds like it has roots in genres that have used theatre, or a sense of the theatrical, as a powerful means of expression, such as noise and black metal. The album has a constant tension held by what feels like an atonal storm of angst and confusion, although symphonic synth tones soar high above the chaos, cutting through providing space within the mass of turbulence.

It is this play with contrasts that leads back to the theatrical, the aim to be able to take a listener into the mayhem, the absolute of a terrifying moment, however only momentary, it’s a suspension of belief. By returning to the safety of the real space, the listener is able to reflect on the severity, insanity and private and public impact of the concept, whereas in reality to be consumed by such horror, would take years after the event in order to find a place to reflect. Having said that, I would imagine many of us have experienced the pandemic as mortifying in some respect, and theatre aside, this may be a great embodiment of those feelings and experiences. 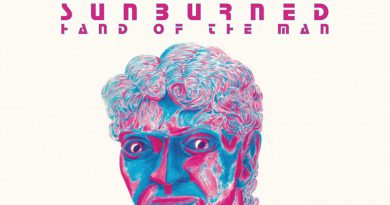