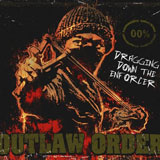 This is a hard punch in the face that drops you like a sack of shit and makes you wise up to the ugliness of being poor in a big stinking American city. Outlaw Order kick out bristling fugitive punk from the lawless and decaying slums of beautiful doomed New Orleans and do not for a second compromise their seething hatred of a US government that has betrayed its own electorate and left them to rot. EyeHateGod offshoot OO% are composed of past and current members that all have been on the receiving end of the law, and serve up a brutal sound that bears more than a resemblance to EHG but with more sheer visceral violence and true hardcore grit.

After releasing an ep in 2003. this is OO%’s debut album, and boy does it hit hard. The sound is pure NOLA filthcore: the guitars are stupidly thick, boiling like molten lead and as heavy as shifting tectonic plates, the drums slam down hard and fast, and Michael IX Williams desperately fucked voice rips out like the dying bark of a tortured outsider strung out on junk and paranoia.

‘Relive The Crime’ is a furious three minute stab of coiling doom sodden wrath that splits its own shirt like an epileptic PCP-doused Hulk. ‘Safety Off’ is like listening to Black Flag again, maybe circa ‘My War’, but through the downtrodden New Orleans filter. Williams is a non-clean Rollins, more ‘real’ than Henry ever was, all battered and cracked but still burning with a painful intensity that dominates this band with an iron will bent on the kind of nihilism that punk posers want to achieve but dare not. Joey LaCaze’s skilful kick heavy drumming, particularly on ‘Alcohol Tobacco Firearms’, is crystal clear and as hard as Marvin Hagler. The fuzzblast guitar sludge of Brian Patton periodically burns with a shit-stained deep south blues intensity and then feeds back in classic EHG style over churning low end bass and percussion that rumbles and thuds with a menace that seeks to consume itself.

At just over twenty seven minutes long, this is just fucking spot on for an album that aims to equate with the force of a double barrelled shotgun. The fury that explodes from OO% cannot be faked, and this debut makes compelling listening for anyone who digs the pungent New Orleans sound of EHG and their various associates, whether on parole, in remand, or currently serving time. (Fact: I was arrested once, and charged with drunk and disorderly and criminal damage, on a Christian nursing home. Night in the cells. I had to go to court three times, and then repair the damage to the door, plant pots and the rockery. Oh yeah. Suck on that, Mr. Bad Ass).