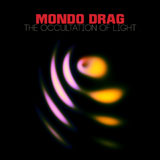 Settle back on your leopard print bean bag, grab a blotter paper sized tab of lysergic acid, turn on your lava lamp and pry open your third eye as former Iowan (and now Oakland, California) residents Mondo Drag look to drag you out of the present time and back to when the acid was strong, the moustaches were big, bold and fucking everywhere. You know? When trousers flared at the bottom instead of around the ass.

The Occultation Of Light is not going to reinvent the wheel and isn’t likely to blow your mind with anything you might not have heard before, but what it offers is a wild trip back to the analog era via some seriously funky heavy psyche mixed with 70’s Acid Pop.

Having entered the studio on the back of some dedicated road abuse, the band members seem completely dialled in to what makes each other tick and this shows as the cosmic collective ebbs and flows with an ever shifting vibe as captured on opening track Initiation. Here delicious organ runs and almost Doors esque urgent guitaring collide with Never Say Die era Sabbath like nasal vocals in a hypnotic, pulsing rhythm punctuated by vertigo inducing string bends. It sounds huge, like some cosmic explosion viewed from a comet hurling its way through space.

The Sabbath vibe continues on Out Of Sight with a riff that could belong on any of the first five classic albums, muscular and menacing but topped by light and dexterous musicianship as they jam the track into a progressive workout. Here they blend into the mellow and introspective space rock of Rising Omen which defies only the most cynical of people not to close their eyes and sway to the chilled out sounds.

The grooves on The Occultation Of Light have also been heavily influenced by the likes of King Crimson, Goblin and Yes which is evident in the lush rich textures that permeate every single track as they take you on individual journeys that somehow contribute to the bigger picture.

From the charming, but frantic pace of Dying Light to the classic 70s feel of Ride The Sky with its hooky “I’m going to fly so high” refrain this is an album that drips with skilled musicianship. Yes, to some it may veer off into indulgent noodling at times, as if the collective members got completely out of their gourd and lost themselves in the moment. It feels like stepping out of time to a place soundtracked by pitter patter drums, dense organ heavy solos and intricate guitar work, but that’s exactly what heavy psyche is supposed to be.

Mondo Drag are a celebration of taking their sweet time to do what they want. Even John Gamino’s vocals are used to sparing effect, only accenting the music to help guide the story, otherwise they are largely absent as they allow the music the space to breath and grow organically. There is nothing rushed about this album and every little nuance has been born out of a jam, then refined and perfected until it fits the vision of what they want to achieve.

The dedication to relocate and the numerous line up changes show that the band are not afraid to strive for perfection in pursuit of their craft. The result is their most complete body of work to date and The Occultation Of Light will be a joy to fans of heavy psyche everywhere.