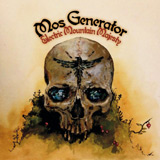 Tony Reed is just one of those guys that you really want to hate…whether it’s Stone Axe, Heavy Pink, his numerous production/mixing/mastering jobs, his occasional random forays into solo dicking about or his work with Mos Generator he just somehow seems to nail it and this new album is no exception.

In something of a surprise move Mos Generator have signed to French label Listenable but pretty much everything else about this record is business as usual. If you are at all familiar with the band you will pretty much know what to expect straight away. Aside from the more experimental ‘The Late Great Planet Earth’ from 2006 which explored the band’s more prog rock pretentions, Mos Generator have been responsible for some of the finest 70’s influenced, Sabbath worshipping rock and roll of the last 10 years and ‘Electric Mountain Majesty’ picks up the baton and runs full steam ahead with it.

From opening track ‘Beyond The Whip’ it’s clear that Reed’s wellspring of ideas has yet to run dry as it busts out with a head down, four to the floor ass kicker of a riff topped off with some soaring melodies.

From here on in the album rocks, grooves, riffs and generally grabs you throwing some small scale surprises along the way…is that a cello ushering in ‘Enter The Fire’? Probably not but whatever it is, it’s a cool break in pace and a touch of sonic deviation that draws the listener in.

I really don’t feel a track by track rundown is at all necessary here; you know for a fact that they will all be damn fine, will all feature killer riffs and sublime melodies, will all feature Shawn Johnson’s Bonham meets Ward drumming and Scooter Haslip’s snaking bass runs. You also know that by the 2nd listen you’ll be greeting these songs like old, familiar friends as the melodies have a habit of burrowing into you and sticking there. You can also put this record on entirely safe in the knowledge that it will sound absolutely fantastic from start to finish with guitars fully to the fore and the rhythm section meshing in a lively, organic manner.

Yes folks, make no mistake, in ‘Electric Mountain Majesty’ you are definitely getting a Mos Generator album. Is it better than anything they’ve done before? Well, that bar was already pretty high so in all honesty I would say no. Is it distinguishable from what they’ve done before? Uh, not really but who cares when you’re getting a collection of songs so damn fine that every listen is a 40 minute injection of pure pleasure right into your veins. Look, what I’m trying to say is that Mos Generator are hands down one of the best damn bands out there right now and this album, along with their entire back catalogue is all the evidence you need of that, so just buy the whole lot and have done with it!