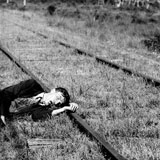 Moloch sound like an industrial accident. A very slow one…and a very painful one. Probably involving a lathe. And a pair of testicles. Genre: pessimist sludge (pessimisludge?) with a shit stain of Hardcore. Recorded in April of this year, this twenty five minute four track e.p. is like a crushed ballbag in a dirty factory. Filthy, agonising, putrid spite shite. I expect all the band members to have rancid breath and open sores on their private parts. Moloch are based in Nottingham, a city I have spent much of my fabled leisure time in as a greasy young man (as a result of growing up in a town about forty minutes away by car), either going to little hardcore gigs or browsing through the racks at ‘Selectadisc’. Notts might be lacking a strong ‘scene’ nowadays and may be riddled with gang crime and bad urban vibes, but let us not forget that the immortal Iron Monkey came riffing it, like mutant bastard Iommi’s, out of this city in the friggin’ indie soaked nineties. One point the Daily Mail completely overlooks when it decides to commission another scathing panic article about this historic city.

If you love the hateful hellsoup of EHG, Grief, Corrupted, Fistula, etc. then this will definitely make your anus tingle. ‘Thy Grief’ starts with the traditional rising wave of feedback and sample of mentally ill person (a furiously hysterical woman). An elephantine riff vomits out and plods along like a wounded prehistoric beast until the tempo changes from sloth to mid. Vocalist Chris (we can only guess his fiendish surname – Smith?) gurgles and roars in a manner that we have come to expect from such artistes. I hope his speaking voice sounds the same. That would be cool: “All right Chris?” chirps up Rob the guitarist. “Yeeeeaaaaaaaahh maaaaate” he screams casually.

Needless to say, ‘Thy Grief’ is a brutal seven minute plus chunk of depressed bile rock. The fantastically titled ‘Who is This Who is Coming?’ follows in a similar varicose vein. There is something very likeable about Moloch is the sense of big big space in their music, created by the drums temporarily stopping to let the lumbering chords change, and then crashing/ thumping back in. Sounds fucking evil. Actually I bet they’re really nice lads with morals and everything, and not at all like Fred West or Rupert Murdoch. But I bet they could do over Deicide in a fight.

‘Black Water’ starts with bloated earthworm bass, all wriggling and coiling along, making all the little girls feel sick. Moloch are up and lurching along like a sedated Godzilla, crunching and fuzzing and farting out recycled slug paced HC riffs. Slow they may be (and so they should be), but the lazy bum beast that is Moloch occasionally breaks into a gallop that must make the drummer sweat down his arse crack like an unfit brick layer. Last track ‘Repulsion’ is an eight minute journey down the U-bend and into the rotting shit of other people: all flailing about, gnashing your teeth and pulling out bits of your eczematic sideburns because you’ve misplaced your anti-depressants again. Samples, screams, riffs, repressed libidinous energy.

Moloch are a misanthropic sludge band. They’re not the first, and they probably won’t be the last. They are not original. If it’s sludge, then usually I don’t care. If it’s post-rock, then it gets on my nips. This is a good quality well recorded release with plenty to delight any fan of misanthropic sludge. The harsh black and white photo cover of a man with his head on a train track recalls the striking stylings of Power Violence, and that very HC aesthetic of anger and despair at THE FUCKING CAPITALIST SYSTEM perfectly sums up Moloch’s electric gut belch of a sound. Listen to this whilst eating whilst eating fresh Fly Agaric and drinking Absinthe, then go out and smash the windscreen of a BMW. Then have a shit outside the church doors. Then have a Pot Noodle. Then weep with existentialist terror.