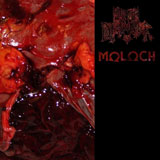 Alongside Denmark’s Bottom Feeder, Italy’s Grime, Massachusetts’ Plague Survivors, the UK’s own Moloch and New Zealand’s Meth Drinker, the term sludge is being reclaimed by a clutch of young bands to epitomise hateful howls, squalling feedback and corrosive distortion at torturous tempo, as opposed to it being applied to any vaguely slow heavy music, or seemingly automatically applied to any band from Georgia.

This is a development I welcome wholeheartedly, and I’m glad to see two of the finest exponents of The New Wave of Worldwide Sludge Metal sharing a split. I’ve had the great misfortune to witness both of these bands live shows, and left both sets feeling like I’d been held down and had rusted nails slowly forced into my aural cavities. I should probably mention I regard that as a good thing.

Meth Drinker‘s side is just what they’ve been delivering since their debut LP, bursts of wretched noise you’d swear you heard on some hesher’s mix tape in 1996 in-between Noothgrush and Grief. Opening with ‘Spleen Splitting Pavement’s’ jagged feedback and skin-rupturing drums, they immediately drag you down to their squalid level. The tempo veers between an alcohol-addled stagger and a crawl to the medicine cabinet. The mix is so thick and murky, you can just about discern a woozy “guitar solo” in there about halfway through, which is more akin to someone trying to pull the strings right off the guitar than any show of musicianship. It’s fucking brilliant.

There’s a short interlude of disturbing discordant bass on ‘731 (Reprise)’ before things rumble back to life in the monstrous form of ‘Test Subject’. A hoarse deathrattle vocal overlays more of that painful cacophony they do so perfectly. Seriously, if you’re going to the upcoming Eyehategod shows and NOT wishing this band were supporting them, you need to take a long hard look at your life and then drop out of it with bong in hand.

This side of the split closes with ‘2 Minute Hate’, and if this is the sort of hateful racket the citizens of dystopian Oceania were forced to endure, it’s no wonder Winston Smith chose to rebel to his total annihilation than suffer it. There isn’t a band out there that sounds more outright disgusting than Meth Drinker.

Except potentially Moloch. The intro to ‘Vomit Phobia’ is an almost welcome respite, opening with some plaintive strumming, this is quite nice, oh wait there’s a burst of distortion the equivalent of an acid bath. When Chris Braddock’s rage-filled roar erupts from the speakers, you’ll wonder if you personally have done something to make him fucking despise you… I’m sorry Chris!

At nine-and-a-half minutes, it’s a real slog to get through the track, but this isn’t a derisive comment, I have the sneaking suspicion this isn’t really meant to make for easy listening. There’s no real cohesion to all the different movements of the track, it’s just a hideous stitching together of various rotten parts, the cumulative effect a sort of writhing, disjointed slow death.

Their other track ‘Hunchback’ is oddly evocative of its title, a lurching, looming stomp of a track that’s almost a radio single in length compared to the song preceding it. Chris’s voice never veers from a single bile-expelling note, but having witnessed first-hand the intense delivery that calls it forth, it doesn’t need to. When you’re that wild-eyed, who needs variation, eh?

The hunchback comes crashing to a halt, and the needle crackles are joined by the licking of flames, and the only understandable words on this whole release, taken from Ben Wheatley’s Kill List: “They’re bad people… They should suffer.”

Good or bad, more people should be listening to these bands. Pick up a copy of this split, and suffer a little.