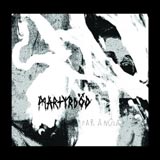 When I was last in Sweden I was given the amazing news that Southern Lord had recalibrated their punk radar and had discovered, amongst the dross of Tragedy clone bands that they seem so intent on releasing, the true masters of blackened crust d-beat fury in Wolfbrigade and Martyrdod. Whereas Wolfbrigade, in my opinion, sit uncomfortably amongst the back catalogue of Southern Lord releases, Martyrdod with their black metal crust vibe will prove surely to be a vital contribution towards enhancing the label’s flagging profile. Yes Southern Lord have come across as a “Johnny Come Lately” when it comes to tapping into good crust punk outfits, having only recently caught onto to the absolute blistering creativity of Swedish punk bands.  But better late than not at all, especially when it comes to signing Martyrdod, because they have always stood head and shoulders above the crowd in terms of their song writing ability and extreme delivery.  Unfortunately they have languished in the shadows by never being given the credit they were due, so maybe now by getting a large label behind them they will have the opportunity to claim the throne that has been theirs for the taking these past ten years.

Now I should probably add at this early stage I have a personal bias towards this band which I should flag up in advance of giving you the review.  I’ve known these guys since 2004 and have been fortunate enough to  play with them on multiple occasions. As even my Swedish friends will testify I am an avid fan and have been since their inception.  Therefore to try and write this with some detachment would seem artificial because I regard them as friends. That’s not to say  the review will be uncritical because Paranoia can only be measured in large part by comparing it with their past releases, all of which you should try to get your hands on.  So for those of you who require some kind of breakdown on what this band is about, let me explain by not only providing some description to the noise they create but also covering their past releases so as to bring you up to date.

It may come as no surprise to learn that Martyrdod define their rhythm as being based around the classic d-beat. And as many of you will know, this comes as a basic requirement for crust bands having its origins from the punk perspective with Discharge. Although if the truth were known this beat has been around since The Byrds 1960s, followed by the Buzzcocks, and then of course Discharge who made it into a staple part of their sound. However, there are many bands who claim to be able to play a d-beat but nevertheless fail in their attempt to really embed the swing aspect. In contrast, Sweden’s punk scene has produced more than its fair share of world beating d-beat bands, all of whom have been able to capture the elusive swing. Certainly one of the masters of this genre has been Martyrdod’s Jens Bäclelin, who executes the d-beat with precision and focussed aggression. He really is the tour de force behind the band, driving them forward with an energy which is truly mesmerising to watch.

Martyrdod’s sound is further defined by the play off between rhythm and lead guitarists Mikael Kjellman and Pontus Redig  who not only bring their punk influences into their exquisite performance but look to enhance their brutal attack with black metal-esque harmony driven finesse. Whereas many punk bands in their attempt to sound bleak and brutal sound happy and thus mediocre, these guys fiercely hold to scales where any expectant light or hope for the future is quickly extinguished. Each note they play acts as a clarion call to evoke utter despair from this planet’s embodied lunacy.

Keeping the backbone of this powerhouse together is punk veteran Anton Grönholm who in more recent times has replaced Per Nilsson, who up until even more recently was playing in “noise not music” punk terrorists GiftGasAttack and Warvictims. In many ways Anton’s inclusion makes perfect sense given the fact that he heads Swedish doomster band Sanctuary in Blasphemy with Mikael and Jens.

It’s been a while since these masters of blackened stud clad crust punk have issued a record.  Their previous album Sekht saw the band taking a more regular approach towards Swedish crust music, and I have to say in my opinion it did not sound as extreme as their first two albums, Martyrdod and In Extremis. The main characteristic of their first two albums was the more washed out spitting in the distance vocal style which gave it a very black metal feel. Also for these first two the drums weren’t quite as prominent as they have become on Paranoia. But putting these production quibbles to one side what do we have with Paranoia?  Do they hearken back to the early days of extremity or have they settled on some middle ground between fairly stock Swedish crust and the innovative guitar harmonised brutality they were once able to harness with maximum effect? Having now taken the time to listen to the album a few times I think they have aired slightly on the side of caution. Don’t get me wrong this is a really great album but I can’t help but feel that Mikael’s involvement in Skit System has seeped through, resulting at times in this sounding like a regular Swedish crust band, rather than the best band to have emerged out of Sweden in decades, which I believe they have the capability of still being.

Track 1 Enough is Enough is a great opening track with guitars riffing out great harmonies that retain an extreme edge. Once we’re in this is sounding like great classic Martyrdod. The lyrics tell of a desire to work towards something positive which works as such a great counterpoint to the bleakness of the music. From the ruins of this world they intend to build a new world and their intent is made clear in the majesty of this track. Furthermore, Mikael’s vocals spew forth the venom that will feed the land with hope.  +++++

Track 2 Overcome your Fear with hammering guitar playing is again another brilliant track. Lyrics command attention as they offer up an opportunity to imagine the world without barriers and nations. The true syndicalist anarchist ideal finds musical expression in this song and it is one we should all endeavour to realise. +++++

Track 3 The Class Enemy is perhaps the first appearance of a new more straight down the line crust direction for the band. Yes of course there are elements of the close harmony guitar work but it’s just on the same level as the previous tracks. Nevertheless the political self reflexive content of the lyrics pull you in to encounter a political rage rarely seen in the punk scene anymore. +++

Track 4 Hear the World’s Cry sees the band gathering past Martydod glories and assembling them into a straight down the line two beat black metal mid pace anthem. Of course it isn’t long before this  is replaced with Jen’s crushing d-beat. And it really works well mixing the two rhythms together. Is it as strong as the first two tracks? Probably not ++++

Track 5 A Heart of Flame springs into life with such an amazing hook you can’t help throw your clenched fist into the air. This is perfect unadulterated Martyrdod. You cannot afford to underestimate the talent on display they really would give any metal band a run for their money while pissing pure punk home brewed cider onto their faces. A crushing track. +++++

Track 6 A Tragic Zeitgeist is undoubtedly my favourite track on this album. Like Heart of Flame this courses with a  venom that makes Martyrdod one of the most exciting bands out there.  Guitars soar in their aggression. This tracks needs to be played at 11. +++++

Track 7 It’s Happening as we Speak is definitely the low point given the blackened grandeur of track 5 and 6. This is their version of skit system and therefore doesn’t sit well with the other tracks on this album. Motorhead-ish riffs make this unremarkable and is something of come down from the previous tracks on display with this release.  ++

Track 8 Paranoia the title track fortunately sees the band back at their very best. Fast guitar licks tinged with formidable metal launches this track into the abyss where imaginary enemies control our thoughts and minds. ++++

Track 9 Meat Mountain a vegan/vegetarian  anthem that can never be reiterated enough is served up on this again more mediocre straight down the line song.  It becomes very obvious with a band like Martyrdod where potential filler tracks are located on the album and unfortunately this is one of those. +++

Track 10 Apology launches the listener into a realm of change and anguish to break out. It is one of those tracks where the vocals really carry the song +++

Track 11 Every Choice has its Price rounds off the album with the band playing at full tilt in old style Martyrdod fashion. A crushing exercise in how punk should sound with the heartfelt roar of pure frustration. These guys are really masters of their own destiny and check the rock out section. Holy crap this is fuckin amazing.  It’s a brilliant end to a really great masterpiece. +++++

So what we have here with Martyrdod’s Paranoia is the new bench mark for all punk bands who believe their music can make a difference. It conveys aspirations for change by never tiring from the topics that should matter to us all. As such Martyrdod have become the martyrs for the punk scene, where narrow mindedness and the role of the bigot are denounced and extolled in the same breath.   For those of you who are not part of the punk scene this should still appeal. Brutal in their delivery and their song writing Martyrdod will blow your fucking heads off. This may not be on par with In Extremis but it’s not far off and if I were you, I would be running out of your house down to your local record shop or ordering online to snag this while you have a chance, because this one is not going to hang around. Hopefully coming to a place near you in the  future… ladies and gentlemen I present to you one of the best bands in the world… MARTYRDOD!!!!!!!!!!!!!!!!!!!!!!!!!!!!!!