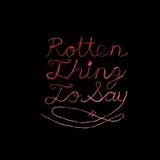 Burning Love is a genius name for a band, particularly a hardcore punk band, what with it’s Elvis Presley link and euphemistic connotations of sexually transmitted infections. This is their second album, and first on Southern Lord, whose output is of such consistent quality that they are now surely one of the greatest of all American independent labels. BL are a Canadian band (from Toronto) and are composed of several hardcore veterans from other outfits, including vocalist Chris Colohan, who used to be lead growler in Cursed. So on paper, this all adds up to another delicious and well picked SL release. But as the final notes of the album exited the speakers I’m afraid I felt nothing more than disappointment.

It all starts so bloody well too. The very first track (naturally titled ‘Intro’) is an absolute fucking stormer – the type of A-grade knock-out introduction that has traditionally ushered in side one of some of the finest albums  (think ‘Intro’: the thrilling opener off Bad Brains’ ‘I Against I’, or even the opening title track from ‘South of Heaven’, amongst other gems). The twin guitars spiral and ascend, taking you upwards in a rush of serotonin-soaked euphoria. Kurt Ballou’s production job is typically brilliant – a huge and full-bodied number that makes every instrument king.

And then, I hit a wall. I know this because after a couple of spins I don’t really want to return. I’m putting on other discs instead. So what’s the problem exactly? Well, good old-fashioned high energy barn-storming American punk rock – the like of which these Canadians play (with great aplomb I may add) – needs tunes. Dwarves have them in dirty bucket loads. So do Black Flag, DOA, Dead Kennedys, Misfits, Poison Idea, Distillers, etcetera etcetera. The huge melodies and catchy hooks that should rightfully accompany such charging punk-rock power are simply not there. Thus I am left with an experience akin to plenty of rice but no curry; a night in the pub sipping lemonade; a fuck without cumming. Indeed, it is a rotten thing to say, and I do not delight in saying it.

BL make the right noises and they’re loud and seemingly full of heart – but nearly every song, from ‘No Love’ to ‘Outro’, is filler. Where is the fucking edge guys? Where is the killer chorus – the one that I hum in my head long after the album has died down? This is ‘punk-by-numbers’: an exercise in stringing chords together in time-honoured fashion, and in truth it makes dreary and uninspiring listening.

Sure, BL utilise all the tried and tested techniques of writing the 2-3 minute classic but it doesn’t convince me because I know that I don’t want to listen to it again. In fact only two tracks hit the quality mark, and they’re both instrumentals. The aforementioned opening number and the fantastic ’12:31’ are stunning exercises in guitar precision that stay burned in the memory, unlike the rest of the album. Both tracks show how massive these guys can be, but on the remaining twelve tracks nothing really happens. I’m waiting, thinking ‘this next track is the one that delivers the rush’. But I keep thinking that until I realise that, the rush is on hold. All fizz and stomp – superb playing and a great grizzled tone from the vocalist but those big tunes that reviewers often praise BL for aren’t fucking there.

I spent my teens with the soaring melodies that characterised the heart-rending rock ‘n’ roll brilliance of Glenn Danzig, Joey Ramone, Milo Aukerman and later on Blag Dahlia (surely I don’t have to match bands to names here?). Whilst ‘Rotten Thing To Say’ is undeniably a powerfully played (and beautifully recorded) platter of raging punk ‘n’ grime, the bottom line is that the majority of the material here is simply forgettable. There is just too much GREAT music out there that begs a listen, and this is going to lose out every time.