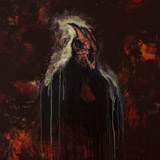 Calgary, Alberta sludge duo Mares of Thrace have only been going for around three years but they’ve already made one hell of an impression with their fierce, complex and, above all, uncompromising metal/hardcore racket. 2010’s critically lauded The Moulting was an impressive and distinctive debut and The Pilgrimage, a concept-album based around the Biblical story of David’s seduction of Bathsheba, demonstrates the band’s ambition and scope without messing with the formula too much.

The most obvious difference between The Pilgrimage and the Mares’ previous work is the recording quality and the tone of Therese Lanz’s guitar. While the previous recordings were slathered in a dense layer of bass tones (perhaps to compensate for not having a bass player), Lanz’s baritone guitar, fitted with both bass and guitar pickups, now has a clearer distinction between bass and treble. As a result the leads are far more wirey and frantic, and the chords are heavier and deeper. Stef MacKichan’s drums also have much more of a ‘room’ sound which helps to give a better impression of the band’s live sound and adds to the eerie ‘oh-shit-they’re behind-me’ vibe of the album. You wouldn’t want these two on your case, believe me.

The album ebbs and flows beautifully too – riotous hardcore sections bleed into mellow comedowns such as “The Three-Legged Courtesan…” which features some of the album’s most beautiful, emotionally ambiguous guitar work. Most of the songs on the album, particularly “Act I: David Glimpses Bathsheba” and “The Pragmatist” weave together old school metal with sludge and hardcore seamlessly. “The Perpetrator” even throws in some schizo rock for good measure before settling into an awesome groove and then kicking out of it again. Some songs evoke the restless, jerky energy of 90’s post-rock pioneers Slint while elsewhere you can hear echoes of contemporaries and fellow female-fronted sludge behemoths Dark Castle. I may be well off the mark here but some fleeting moments even bring to mind the guitar-work of fellow Canadian Neil Young. “Triple B” on the other hand is a kind of pulsating, electronic nightmare – not in the same way as Neil Young’s Trans album, but in a good, atmospheric way. Regardless, you get the idea – the album is a complex montage of styles and genres.

Therese Lanz’ vocal chords take a good old thrashing on the album too, screaming herself hoarse until the microphone can take it no longer and begins to distort under the pressure. By the end of the album I wanted to force Therese to drink some hot lemon with a spoonful of honey but I’m sure the suggestion would have been spat back in my face, quite literally. The combination of Lanz spitting razors, the pounding drums and the cutting, serrated guitars makes for a hugely unnerving record about one of the more controversial allegories in the Bible.

Truth be told, the Biblical context of the album could easily be overlooked in your enjoyment of it; although the story ties the album together thematically and gives the album a seamless feel, it’s all incidental compared to the drama that the music evokes. With The Pilgrimage, Mares of Thrace channel the fury of women scorned and prove that they’re a fiercely original and crushing force to be reckoned with.