I seem to be in the habit at the moment of covering artists whose identities are shrouded in mystery, firstly postcards from new zealand, then Drug Toilet and now here with Light Of The Morning Star. I managed to find the name of a member, O-A, but only after much Sherlock Holmes style digging. It should be said though that this ambiguity only served to add to the intrigue and appeal of the artist, and voila, here I am reviewing their latest album.

Light Of The Morning Star hail from London and Charnel Noir marks their (?) third overall release following 2017s full-length debut Nocta and the 2016 EP Cemetery Glow. The beautiful artwork betrays a romantic sensibility, albeit one that is quite eerie; this seeming duality reminds me of the feelings I had the first time I saw the cover of Joy Division’s Closer with the black and white photo of The Appiani family tomb.

If you were lusting for raw black metal with an abysmal production then you will be left disappointed by album opener Charnel Noir. The track has a punchiness to it and an immediacy, albeit one that is injected with a healthy dose of Mysteriis Dom Sathanas style coldness. Our Night Hours stuns with both its elegance and Pete Steele influenced sonorous vocals, unlike Type O Negative however, there isn’t any tongue in cheek humour to be found, although that doesn’t necessarily mean it is po-faced either. Ghost Moon is a little more understated than the preceding tracks and I was reminded of classic death-rock outfits such as Christian Death and TSOL in their prime. There are even hints of The Damned’s Phantasmagoria as well, minus the goofiness of tracks like Grimly Fiendish, thankfully. What it may lack in accessibility it more than makes up for in atmosphere and a sense of foreboding.

Hymn In Hemlock taps into some cool early The Cure vibes, before they started thinking they were New Order. Lid Of A Casket, as you would expect from the title, takes a heavier and far darker route, elements remind me of Gaahls Wyrd’s 2019 album GhastiR – Ghosts Invited. There Are Many Shadows taps back into the Mayhem school of creepy atmospherics and while decent, doesn’t bring anything new to the table. The Endless Procession Of The Guillotine, despite its ponderous title, is another driving and exhilarating slab of goth and doom metal which will doubtlessly please fans of bands such as Moonspell, Tiamat, Saint Vitus and Candlemass.

Spectres, has a definite Sisters of Mercy influence and is anything but subtle. Huge drums, soaring vocals and melodrama are all the order of the day, so if you’re not a fan of the more flamboyant side of goth-rock then you’re probably best avoiding this one. Fangs In The Tree Of Life is the longest track at over six minutes and ends the album in an epic fashion. It’s one of the more ‘progressive’ pieces on here which contrasts strongly with the directness that has largely dominated the majority of the album and will appeal to fans of ever evolving bands such as Satyricon and Emperor.

The album is described as ‘music for night hours and sanguine addictions’ and there is some truth to that statement; it’s certainly an album that makes for the perfect accompaniment to a glass of wine, and a chapter or two of Baudelaire. An impressive work packed full of well-written and produced tracks, all of which contain enough musical diversity to appeal to newcomers and old-school goths/death-rockers alike. 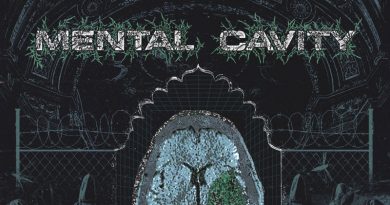