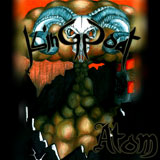 The first lyrics that seep out of new Brighton doom merchants’ King Goat’s debut EP are ‘A lumbering machine…’ and that’s a very fitting description of their sound, as the track ‘Machine God’ rumbles its way clumsily forward, like a rusty Iron Man, pulling down telegraph poles as it crushes onwards.

When you hear the words ‘doom merchants’ you may, even though you love all that is mournful and heavy, be thinking in a tiny dank corner of your brain ‘how many doom bands are there now, there must be MILLIONS?’And you could be forgiven for this slight outbreak of cynicism, for it has indeed become flavour of the metal month somehow, far from the days when admitting to liking St Vitus would have garnered only raised eyebrows and shrugs from your mates, clutching their copies of ‘Master of Puppets’ or ‘Vulgar Display of Power’. Now you’re more likely to be called a hipster if you roll off a list of just-obscure enough doom bands to anyone who asks, than some form of musical methuselah who is terrified of the thrash.

However I’d like to suggest that King Goat don’t fall into the ‘another’ doom band category, although admittedly they do have the necessarily classic foggy trudge sound down to a tee, and indeed part of the point of this music is not to tread too far from the beaten path. No, what makes them a pretty distinctive proposition is the slightly tortured bleats of their vocalist Jockum, who offers up a relentless, monochrome mourning in his delivery, but it’s strangely affecting, not descending into the sort of Candlemass campness or lame attempt at sounding like a Texan ranch-hand that might render the band a bit forgettable, despite the very competent and classy musicianship on show, reminiscent of Candlemass et al admittedly, yeah.

The best thing about doom is that it can be a safe place to allow more individual, less metal vocalisms to explore themselves, and a more genuinely vernacular accent that actually represents a more honest approach. This record is certainly a great example, the bespectacled Jockum leading, appropriately, from the front.

The songs total three plus a pretty, minimal little guitar instrumental, mainly sticking to the psychedelic (ie reverb friendly) mid-tempo style, but shifting a few gears in the process and laying down some lovely solos in the guitar department. Jockum occasionally breaks out a growl or at the end of closing track’ Cosmic Mastermind’, some proper black metal howling a la Count Grishnackh.

It’s all very good fun, with a slightly sprightlier overall attitude than a lot of doom, and I look forward to checking these guys out live. Not revolutionary, but I don’t think that’s the point, more slight progress upwards through the primordial slime.