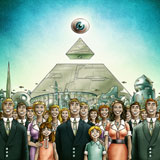 I have to admit I never got round to checking out Ironweed’s debut offering “Indian Ladder” which landed in 2008, so I approached my initial listen to this album with no idea what to expect other than some preconceived notion that it may involve some nice fat bluesy riffs, big grooves and beards that so many Small Stone bands excel in delivering. I didn’t expect a powerhouse metal album with balls of steel!!!

Sure, the riffs here are certainly bigger than J-Lo’s ass and fuzzier than Ron Jeremy’s chest but they bristle with a metallic sheen that somehow manages to bring together elements of Alice In Chains style grunge with the catchier, groovier elements of Anthrax’s prime 80’s output. If I may be so bold as to make another Anthrax comparison I would say that Jeff Andrews’ classic high throated vocals occupy the same territory as so many classic 80’s power metal bands with something of a nod towards Joey Belladonna’s helium fuelled approach.

This album is a mammoth riff-fest from start to finish that piles crunch on top of crunch bolstered up by relentless rhythms. A track by track run down is almost redundant though “The Lucky Ones” is a clear highlight with its incessant “My dead friends are the lucky ones” refrain that continues to ring out long after the album has finished. It isn’t all heads down to the finish drum patterns and huge riffs however, Ironweed do know when to hold back and on a track such as “And The New Slaves” they show they are able to vary their dynamic attack as the song builds from a balladic verse to epic mid section through prog tinged psychedelia into a full on metal assault and back again before heading into outer space…pretty much all facets of the Ironweed sound blended into one song.

This may not be the most immediate album to grasp. I have to admit on first listen I was left thinking “what the fuck” as I felt that I’d been transported back 25 years to a time when my jeans were sprayed on and my hi-top trainers were pristine white, but repeated listens have opened up the subtleties held in this album. Most albums aren’t without their weaknesses and “Awaken” is a bit of a dip; the vocals bordering on a little too shrill for easy listening and possessing a chorus that does delve into the cheesier side of 80’s metal. Fortunately the rolling rhythms of “Messenger” quickly bring things back on track.

Recorded at Mad Oak studios under the guidance of Benny Grotto this is, as you might expect, an exceptional sounding piece of work with crisp, all encompassing guitars and an overall thick, warm tone that allows Andrews’ vocals to shine.

I will admit, this isn’t my favourite album in the Small Stone catalogue, but then the competition is pretty fierce. It is, however, as strong a metal album as is likely to be released this year and a million miles better than some of the appalling shit that is pedalled in the pages of Kerrang and Metal Hammer as the “next big thing”. Definitely worth a listen if you’re in a head busting mood. 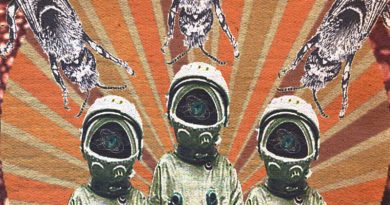