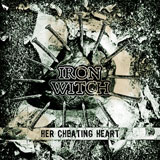 Witch Hunter Records and Dead Chemist Records have conspired to release this beastly 7” split between Liverpool’s Iron Witch and Northampton’s The Atrocity Exhibit, two respected names on the UK’s sludge and grindcore scenes. While on paper this difference of genre could make for a slightly lopsided split release, the sense of spite inherent in both bands’ music creates a cohesion across the two sides, helped by the fact that The Atrocity Exhibit have chosen to contribute one long sludge song rather than several shorter ones.

Iron Witch‘s contribution – ‘Her Cheating Heart’ – is a pleasing, lumbering slab of sludge misery inspired, unfortunately, by a series of “lying, cheating whores.” Charming. But Iron Witch clearly aren’t here to charm anyone, as evidenced by ‘Her Cheating Heart’’s waves of deafening feedback and an arching rhythm so drunken that it seems ever on the verge of collapsing in a corner and pissing all over itself. Chris Fane’s voice is quite probably flammable as he screams Jameson-tainted bile over a cacophony of Dopesick-inspired riffs (indeed, Iron Witch might like to consider changing their names to IronHateGod if ‘Her Cheating Heart’ is anything to go by). But it doesn’t matter that Iron Witch wear their influences on their sleeves, particularly when they execute their swaggering homage this well. For those of us eagerly awaiting the next EHG album, ‘Her Cheating Heart’ is a tantalising and essential stop-gap.

As if Iron Witch weren’t bilious enough, flip the record over and you have The Atrocity Exhibit’s ‘Throne Of Bile’ to contend with. Again, these guys mean serious business and for this particular pairing they’ve written a song at least twice as long as most of their other, faster songs. This slowing of pace does nothing to lessen their impact, and in fact the torturous to and fro of the guitars gives the impression of flesh being torn apart. You won’t find anything remotely resembling a melody to hang your hat on here – ‘Throne Of Bile’ is discordant in every way, from the tense, careening guitars to the Johnny Morrow-esque vocals. The Atrocity Exhibit have gained a formidable reputation for their brand of crust and grindcore, but ‘Throne Of Bile’ puts forward a strong argument that they ought to make a full-on sludge album next.

All in all thirteen minutes of utter misery then, but, as the old adage goes, misery loves company, and here at the Sleeping Shaman we welcome misery and grief with open arms. Iron Witch and The Atrocity Exhibit have given us two mighty and differing takes on sludge, making this an essential purchase for all fans of the genre.