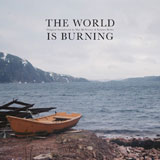 The World is Burning is a 2013 short film set in Newfoundland, written and to be directed by Justin Oakey. The story focuses on a young man living in Toronto. After learning his grandfather was fatally attacked by coyotes, he returns to rural Newfoundland to be with his family. It’s a well-executed and atmospheric little piece which can now be viewed online for free and streamed below.

The World is Burning was funded via a Kickstarter campaign, one of the contributor perks of which was a CD (and/or vinyl depending on how much you pitched in) copy of the film’s soundtrack, written and performed by Mat McNerney (Hexvessel/Beastmilk) and Kimmo Helén (Hexvessel). British born McNerny has described their approach to creating the soundtrack:

“We researched a lot into Newfoundland and traditional folk music of the past and today, spending a few months looking into and listening to libraries of collected works. […] Together with the multi-talented craftsman Kimmo Helén we set about creating a soundscape using only traditional instruments that would have been used in Newfoundland folk.”

“Haunting” is a word that I’d really like to avoid overusing in this review so I’m going to get it out of the way right now and say that, were I forced for some unspecified reason to sum this record up in one word, that word would very probably be “haunting”.

Many of the tracks are very short (four less than a minute in length, seven less than two minutes) but all are full of character and atmosphere. Spirit Call – The Pine-Dream Fragment’s cracked whistle intro blends into warm, rich accordion tones; Homeward Trails’s buzzy yet sweet strings speak eloquently of a melancholy homecoming; Reflecting’s twin banjo and violin sounds (somehow) convincingly Canadian, rather than British, Finish, or even American. Embers Glow Anew comes in like a kind of second movement to its predecessor; more urgent this time but with the strings ribboning the whole thing elegantly.

A Fire In The Blood Stirs opens with frayed low strings which are joined by low wordless vocal sounds. The strings and the voices blend and interplay forming an organic, moody soundscape. The bright guitar strings of To the Land Within are a huge contrast both emotionally and sonically.

A shorter and slightly bleaker version of Homeward Trails paves the way for The Pine Dream in which folk instrumentation is joined by a bit of subtly psychedelic electric guitar. Short drippy delay and backwards FX swirl around rich bassy accordion drones.

Through Death Returned is another twin banjo track has a kind of Western feel to it – there’s a sense of gathering tension and of vast open spaces with small troubled people within. Bone And Blood Revival’s pounding drums and breathy vocalisations deliberately invoke the spirit of Canadian aboriginal music (or at least an idea of it) so that the two tracks almost feel like two sides of the same coin.

Here In My Heart I Know This Is True And Real reminds me very much of something from 3epkano’s At Land album – it feels greater than the sum of its parts and seems to create its own believable little world and atmosphere around it. No mean feat in one minute fifty three seconds. The World is Burning combines elements of Blood And Bone Revival and Burning World Theme to create a more urgent, darker version of the latter.

Blessed By Spirits They Merged With The Forest begins with two minutes of long, though tuneful, drawn out accordion notes, then we get a bit of surprise as some blended reverbed guitar and drum ambience gives way to some beautifully mixed bluesy slow riffing. All of a sudden we’ve got something that sounds like McNerney’s take on Bees Made Honey era Earth. As the track progresses feedback, strings, and whistles blend with wordless vocals to form a highly textured drone behind the mono-riff. It’s not genre-shattering but it works brilliantly and for me it’s the standout on the record.

Silverbirch Mirrorworld closes The World Is Burning and feels very much more in tune with what Hexvessel usually do. It’s dreamy psychedelic folk-rock and I’ve nothing against it whatsoever.  If you’re already a fan of the duo’s previous work then I’d imagine this will be your instant favourite and a highly satisfactory end to a beautiful and haunting album.

The World Is Burning is out now on CD and Vinyl from Svart Records.