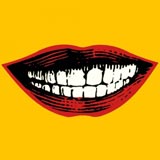 Whoa, without so much as a knock at the door these guys come stumbling into your home and take over right away. I’ve never heard of Hot Lunch, I’ve never seen any press and any info is pretty hard to come by but if this tasty little slab of wax is anything to go by, rock and roll may just have a band to pull it back from the brink!!!

Citing influences such as Grand Funk Railroad, early Hawkwind, Blue Cheer, 80’s skate punk, The Who, CCR, Misfits amongst a whole bunch of others, Hot Lunch kick out the jams like righteous motherfuckers with a brash, high octane blast of punk fired retrogressive rock and roll madness. The A side, “Killer Smile” blasts off like the bastard love child of Grand Funk going head to head with MC5 while Sir Lord Baltimore look on choking on mushrooms!!!! It’s a heady blast of rock and roll that wouldn’t have been out of place in 1973…it rocks, grooves and boogies in equal measure with vocalist Eric Shea busting his lungs with an almost religious zeal.

B side, “You’re Alright” is allegedly a cover but the original performers are unknown. It doesn’t matter though as the stamp of authority shown on the flip side is all over this!!! Like 60’s garage rock played by guys who are teetering on the verge of psychosis. This is a shit kicking rock and roll party waiting to explode and have the police come knocking.

Many bands aim to achieve this kind of sound but most fall short of the mark…Hot Lunch hit the mark right on the money and keep on riding into wasted oblivion. The word is these guys are set to release an album on tape and vinyl…that’s right motherfuckers TAPE AND VINYL!!! This shit is old school…fucked up, rocking, righteous and old school…it feels good to be alive!!!