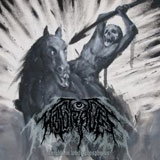 “Running and hunting and slashing and crushing and searching and seeing and stabbing and shooting and thrashing and smashing and burning and destroying and killing and bleeding and pleading then death”. These are the words that, if you were to chop any of the three members of Hot Graves in half, you would find running through the bodies of the entire band collectively, probably in hot pink Olde English script. I’m pretty damn sure of it.

Knights in White Phosphorus is the coup de grace after the crippling blow dealt by Hot Graves recent Desecration Time 7”, a punishing D-beat deathrash attack fuelled by chainsaw gutsfuck guitars, totally blower bass and a thoroughly pummelling thunder-machine. Top that off with  ominously bestial vokills from hell and what do you have? Well, as the Europeans used to say, you have TRASH METAL!

That’s right, ‘Trash’ not ‘Thrash’. Hell, even Tom G barked out ‘TRASH’ in the early Celtic Frost days. This is some filthy, nasty dank shit right here. Think Destruction, Sodom and Kreator, think back to the loud, rude and crude days of Euro-thrash, THAT’S where this flesh-trident of hell-metal is coming from. None of your clean, polished scooped-mid US thrash tones here, just rusty chainsaws and incessant thundering double bass punishment, like Slayer before Rick Rubin stuck his beard in, only far nastier.

The boys literally RIP through the first five tracks as though Satan himself was on their tail – although, to be fair, he’d probably be running from THEM – ‘Dirthrash’ ,’Fully Charged”, ‘Worship The Goat’, ‘ Bad Blood’ and ‘I Claim Your Blood (In The Night)’ fly past in a blur of hellish hammering, spiky riffage, screaming solos and demonic invocation, and it’s not ’til ‘Blood Eruption’ that Hot Graves step off the gas (briefly) and give you a moment to breathe by opening up with a dramatic chugging intro riff at something less than warp-speed. Of course, it soon enough speeds the hell up again and warps into total blast-territory, but, hell, I ain’t complainin’!

‘Total War’ comes on like a D-beat High On Fire, replete with guitar-hero soloing, and ‘Kill For Satan’ also shows that guitarist/vokillist Myk is no slouch at the dusty end of his axe, tossing off another ripping shredder.

‘Dirge Ov The Apokalyptik Hordes Ov The Toxik Damned’ is a punchy instrumental that moves from spaced-out doomy vibes and into punishing Death Metal territory as though it was the most natural thing in the world, and then segues right on through into the D-beat chugging onslaught of ‘Get Killed Tonight’. ‘Rotted’ is seriously intense blackened death metal that gives way to a dirty great classic thrash section and another ripping solo, and ‘Scarred’ is a punky, spunky li’l number with a totally killer fast chugging HC section.

Into the final strait now and STILL no let-up, aside from the previously mentioned moments of respite – ‘F.O.A.D’ (not the Broken Bones one) is a punky D-beat ripper with a KILLER death-grunt lead breakdown, ‘The Craving’ rips along merrily before throwing in some tasty harmonised and discordant techy moves and the retread of ‘Desecration Time’ just flat-out SLAYS.

Knights In White Phosphorus is so unrelenting in its total thrashing that you’d be lucky to come away from listening to it without at least mild concussion and a two-day bangover. These three metal maniacs from Florida know what time it is and so should you, it’s DESECRATION TIME!

Thee Silver Mt. Zion Memorial Orchestra ‘Fuck Off Get Free We Pour Light On Everything’ CD/LP/DD 2014