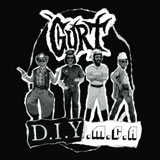 At once, there’s a bluntly obvious nod to Pantera. DIYMCA, by Gurt has all those well known elements that make up that Pantera-esqe sound and style. That being said, there are, of course, unique qualities to this band that stand them apart. Overtly dissimilar are the vocals. Not allowing himself to be caged in a certain cliché and redundancy, the vocalist of Gurt will not sing; appearing to hail from the “metal singers don’t have to be able to sing” school and where Phil from Pantera had that super deep guttural quality to his voice, this guy in Gurt does in fact possess that metal growl, only operating it at a couple of octaves higher; very much in the style of Germany’s metal godfathers Destruction’s vocalist: Schmier. Quite a welcome noise to my ears was the further distancing of Gurt from those “been done before” cookie cutter stabs by completely unoriginal bands at commercially successful carreers simply by mixing “it” up; c h a n g i n g; changing the sonic ride by consistently shifting tempos, bold and brave new aural atmosphere exploring, and promoting the unexpected.

The talent is here, the competency is solid; competency being what I feel to be the most important and necessary foundation for any band to survive; thrive; to incite me to even allow a second listen. Once the first test is met, I can then crack the door open further to see what the “salesman” really has to offer. What I found offered here in Gurt’s DIYMCA, is good, but not great, metal. I have tried and tried, thought and thought, sought and sought, within this latest release, some unique ground breaking and radical auditory surprises, but disappointingly didn’t find any really. That’s too bad. Gurt has a lot of things going for them. They are a very tight well performing little machine. For me to continue to listen to them with any sort of zeal, there has to be something that just knocks me out. Not here. Bummer.

You mustn’t get me wrong, though. DIYMCA is actually a good piece of work. I can genuinely appreciate where they’re coming from, what they are trying to do. I “get” them, their humor, the lyrics, the song titles. For example, the first song on this release is titled 8 Out Of 10 Cunts (probably my all-time favorite word) and the name of the EP itself is DIYMCA. I mean, come on, that’s pretty funny. It’s stupid funny, not intellectually funny like act III, scene four of As You Like IT by Shakespeare. This is low end, non-brain straining silliness; my favorite kind. I would have to say, from what I’ve heard, that in DIYMCA, Gurt bombards us with everything that they got. What they got is real good, but not enough to “kill ‘em all”, if you know what I mean. For the band to gain any semblance of respect, they need to kill. As they are growing as a band, I do hope they do just that with future works. I am only speculating, but I can totally see the band “pulling the sword out of the stone” as they develop. Who knows?  They just may decide to go have a little pow wow with Satan, like the legend of Dylan, Zeppelin, Robert Johnson and a whole slew of other famous musicians. It is quite possible that with their souls off the market and sold, that secret magic exceptional ingredient given to them by Satan, will be their calling card to the big time; to legendary metal status; to fame and fortune.