The announcement made in November 2020 that Samsara Blues Experiment were breaking up left a giant vacuum in the stoner/doom/psych scene. I first encountered the band at Desertfest London in 2017 and fell hard for their brand of psychedelic stoner rock, so to say the news was a little hard to bear would be an understatement.

In conjunction to Samsara Blues Experiment, Christian Peters had been steadily releasing solo albums under the name Surya Kris Peters which saw him tapping into the world of ethnically inspired synthesized improv music. Intriguing as those records were, I had been hankering for something a little more organic ala his former band, and so had Peters as he explains in the album’s promo notes ‘I came to realize where my other true passion lies and where I wanted to go in my life as a musician: back to that ol’ psychedelic rock’. Hence here we have Fuzz Sagrado‘s full-length debut, A New Dimension.

Opener, and title track, A New Dimension is different to what you’d expect from Peters, and tone wise I was reminded of Tony Reed’s work in Mos Generator and Stone Axe due to the robustness of the riffs/vocals that contrast with the murky expansive psych of his usual output. Lunik IX sees Peters back in familiar territory with echoed vocals and trippy effects that will bring a tear to one’s eye as it recalls his late, great former band. Absolute sonic bliss that you would expect from the man that brought you Samsara Blues Experiment.

Baby Bee, the shortest track on the album, is a playful piece that is part Pink Floyd, part Hendrix and serves as a pleasant interlude, meanwhile In Her Garden adds heavy blues to the psych proceedings and feels like a guitarist’s wet dream with some of the most tasteful playing you’ll hear in a long time. I detected a post-punk/goth vibe too ala Love and Rockets and Dali’s Car, never a bad thing in my opinion.

The Mushroom Park takes on a Folk dimension with some prog synth flourishes and reminds one of Jethro Tull with a little Opeth thrown in along the way. A really well constructed number that gets even better after repeated listens. Further at over eleven minutes is the longest track on the album and an absolute standout as far as I’m concerned. If the late Gary Moore and Stevie Ray Vaughan tick your boxes with their melodious blues influenced guitar playing then prepare to have your mind blown, albeit injected with Peters own otherworldly synth space-rock psych prog (there’s a mouthful) vibes that make the music far more captivating than those aforementioned artists.

Tropical Rain interestingly points to ‘90s alt rock, while parts also remind me of Achilles Last Stand by Led Zeppelin; add in some electronic elements and you have all the ingredients for a truly fascinating listen. Need For Simplicity is an instrumental that lives up to its name with some lightly strummed acoustic guitar and minimal synth effects, while Crashing Cascade recalls Depeche Mode at their darkest and makes for a downbeat yet effective conclusion to the album.

This is an incredibly diverse record that sees Christian Peters drawing on both his own catalogue for inspiration as well as from a wide variety of musical genres and styles, some of which may prove surprising. Samsara Blues Experiment saw Peters expand the possibilities of stoner psych, this latest project sees a wholesale destruction of those possibilities and musical constraints in favour of unfettered experimentation. All of this makes for recommended listening for newcomers and long-term fans alike. 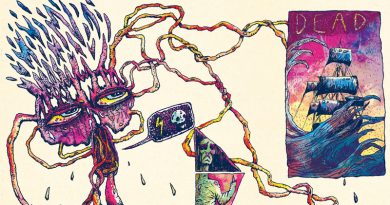