Have you ever turned on a song and it immediately resonates with you? I mean, implants itself so deep into your brain that you need to hear it as often as possible. Earthrise has done that for me and pulled me back into the world of post-metal I was slowly straying from. Their sound is impeccable and as far reaching as the space the concept album is about.

Earthrise calls Minneapolis home and after a ten-year hiatus return with sophomore album Until We Rest Beneath The Winter Way that was released on October 14th. It’s my first experience listening to the band, and I certainly hope not the last. Two additional members (Jim Schloemer and Sam Halvorson) were added to the original three (Andy Rutledge, Jimmy Neumann, and Mike Britson) and they have been able to enhance the atmospheric textures and forceful walls of sound.

And explosive is how it starts. The New Man doesn’t hold anything back and the listener could be knocked out of the chair. It’s intense with harsh vocals and slowly eases into a trance inducing state. The reverse crescendo is fantastic, setting up the next track that reminds me of some of my favorite songs, Kepler-62f by Tungsint and Kepler-452b by King Bastard. Maybe this song needs to be renamed…

From Below is the song I was describing in the introduction. A droning undertone is constant with clean chords delaying for eternity. Clean, soft vocals chime in and Amenra playing live in a Belgium church comes to mind. I close my eyes and let the music take me away. The chords become distorted, and the vocals take on a raspy powerful tone, holding out the notes perfectly. Chills set in around the time the drums join and we’re only two minutes in. The intensity of the song increases to the level at the beginning of The New Man. Two songs in and I don’t know how much more my mind can handle.

Hypervigilant’s power quickly drops off and the song returns to the ethereal sounds and vocals; ‘A vessel with no home, propelled to the unknown alone.’ This concept album recalls Soviet Union’s Sputnik 2 project sending the first living being into orbit. Laika was a dog that was strapped in the vessel and launched into space in November 1957. These haunting lyrics recall these events backed by emotionally moving music.

Lyrics tell the story, but the music allows you to feel it. Each note and sound was carefully crafted to create the needed soundscape, much like one of my favorite band ISIS. Generation Loss feels like it could fit on Oceanic. The music isn’t overly intense and has movement. The musicians blend so well together and create an outstanding soundscape. The harsh vocals over the top are a nice contrast. The vocal ranges on this album are insane and I’m unsure if it’s one singer or multiple, but either way it’s very impressive.

The musicians blend so well together and create an outstanding soundscape…

Our Work In The Stars Cannot Wait may be the heaviest track on the album both sonically and lyrically. The title describes the Soviet Union’s rush to get Sputnik 2 into orbit with Laika onboard, despite Sputnik 3 being the more viable course of action, as waiting wasn’t an option. The race for space was intense, much like the music portrays and a life was spent carelessly just to be first; ‘Lost senses stir within, masking signals of alarm…’

I’m in awe of the atmospheric sounds the band creates. It’s inspiring for my own playing as well as essential for the story being told. I imagine the song Prisoner’s Cinema to be Laika’s experience in orbit before her untimely end. The aptly named song paints a picture of the canine’s view from space. It’s believed she orbited the earth four times and I would hope that was a calming time seeing the world from above.

Engineers Of The Human Soul and Void Hymn work together to build the tension for the sorrowful conclusion. ISIS vibes are strong again and appreciated. Especially at 4:43 of Engineers… where the song pacifies temporarily, and the drums remind me a lot of Weight by the aforementioned ISIS.

We have reached the conclusion of both the album and unfortunately Laika’s life. Tears Of Burning Light recalls the horrific events of Laika’s final moments soaring above Earth; ‘Lost into the starry night, an offering. Gasping the forging fire, caged to darkness…’ A malfunction of the cooling system cause Laika to overheat in orbit. Like perfect bookends, Tears Of Burning Light trails off into a droning trance. Sputnik 2 is lifelessly orbiting the earth until it falls and burns up in the atmosphere five months later.

More people need to experience Until We Rest Beneath The Winter Way and I hope it sinks deep into their soul, much like it has for me. I hope more music is on the way soon from Earthrise because this album will hold me for a while and there is a debut album to dive into, but I don’t think it will be enough and the craving for more will be coming soon! 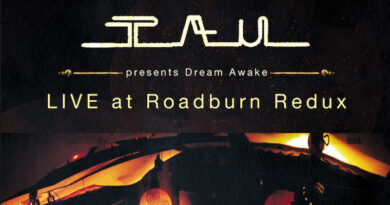