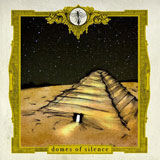 Tenacity, determination, bloody mindedness and talent…Domes of Silence have it all by the truckload. Since their debut album “Mescaline” emerged in 2004 on the Shifty Disco label the band, led by the singular vision of frontman Sean Parkin have battled stylistic changes, multiple line-ups and serious illness and still they forge forward with gritted teeth and bloody knuckles.

Taking matters into their own hands Domes of Silence have decided to release this two track masterpiece themselves via itunes and in doing so are possibly showing the rest of us what we should be doing. Lead off track “Temple of the Wasp” is a fine slice of fuzzed up desert rock…the guitars have more beef than a butcher’s bin and the rhythm section drives this home like a Mazeratti!!! While the music tips its greasy trucker cap to Queens of the Stone Age, albeit with more piss and vinegar, Sean’s vocals contrast perfectly with a bellicose croon that brings to mind Jim Morrison, Iggy Pop and The fall’s Mark E Smith. Restrained yet with enough of a bile ridden edge the vocals may be an acquired taste but this is really what sets these guys apart from the pack and after a couple of listens you couldn’t imagine it any other way.

Track two “Bad Wisdom” takes a deep snort of espresso and steps on the gas to prove why this tune has become a live favourite for the band. Another simple yet highly effective riff backs up Parkin’s gritted teeth vocals while the drums threaten to punch through the snare skin. The cheeky guitar motif that repeats in the background of the song is like an aural dose of heroin!!! That little bastard will be echoing round your head for days.

I understand an album is in the bag but as yet there are no firm plans to release it…hopefully soon. In the meantime download this little sucker…and if you don’t have an MP3 player to listen to it on then go and get one, even if these are the only two songs on it it’ll be worth the money.