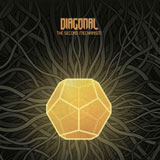 Diagonal consist of seven guys from Brighton in their 20’s. Now, many guys of this age would be interested in weekend blow outs and copious girl chasing, Diagonal, on the other hand, look as though they’ve been transported from a time where they would be happier listening to obscure prog rock and free jazz whilst watching The Open University or perhaps discussing astro physics over a pint of Watney’s Red Barrel and a spliff! Everything about Diagonal screams from the 70’s from their look to their take on progressive rock.

It is clear that Diagonal’s greatest influence comes from the vast array of obscure and forgotten prog rock bands of the era and the even vaster sub genres that entails such as Kraut Rock, blues, free jazz and early proto hard rock. Now, I am partial to a bit of prog myself but my experience sits more firmly with the big hitters of the era such as Genesis, Yes and King Crimson and, while the band do hint at those bands to some degree, to make such comparisons would be lazy and inaccurate. Diagonal successfully combine hard rock riffs with soaring keyboards and a jazzy melange of off beat jazz drums, saxophone and what sounds like clarinet. The effect does have a certain Zappa vibe, mostly due to the jazzier elements and the presents of brass and woodwind.

Unfortunately prog, in today’s terms at least, seems to have become a byword for excessive technicality encompassing a million notes every four bars and as many tempo changes. This is not the Diagonal way. These guys draw straight from the original well spring from which prog first flowed to create five extended pieces of mostly instrumental music that build in atmosphere yet remain tight, focussed and flawlessly melodic, never sacrificing the tune in favour of outlandish technical wizardry. In fact, on a track such as “Mitochondria”, replace the wind instruments with heavy guitars, add some vocals and you have “Nothingface” era Voivod. If I were to recommend an album to the cautious and uninitiated who are just taking their first tentative steps into the world of progressive rock, this may well be an album I would look to as a sterling example of the genre. It’s certainly a million miles from the pseudo prog farts of bands such as Dream Theater!!!

This album is certainly no quick fix for the casual listener. If you are prepared to invest yourself in listening to the album then Diagonal are prepared to invest their considerable skills in creating a breathtaking piece of work that flows from mood to mood, from sublime melancholy to dark and brooding to epic and majestic and all points in between along the journey. I may have shied away from prog rock in recent years but this is the kind of album that could well send me searching through dusty racks in second hand record stores and charity shops in search of forgotten classic vinyl by the likes of Magma and Van Der Graff Generator. For now though, I quite fancy a pint of Watney’s Red Barrel!