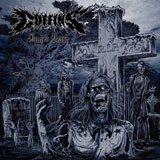 Oh sweet jesus this is the fucking shit! I have here in my rotting puds the new Coffins CD, a band that embody that long lost genre Death Metal as I know and remember it. A genre that has become a shadow of its original incarnation, a scene obsessed with speed, technicality and ever more polished production jobs and image aware plasticity. To draw a cinematic similarity, modern day DM is the equivalent of ‘Resident Evil’ compared to the old school’s George A Romero directed ‘Dawn of the Dead’. Coffins draw their influences not from the yawning widdle and blast of Origin but from the crust death dirge of early Autopsy and Impetigo. With a production job that nearly drowns the band in their own fetid stink ‘Buried Death’ is every bit the true ambassador for the old guard.

The album kicks off with an open chord slow groove and its immediately intoxicating, so strong is this pungent elixir they have been slowly fermenting. The track then morphs into the main riff of opener ‘Under the Stench’ which rumbles along until the track is broken up by a wah-peddle bass solo, and, it fucking works too! ‘Cadaver Blood’ starts off with a riff so slow and plodding it could have been on the new Weedeater record before it lurches into (un)life with mid pace riff straight outta Chris Reifert’s library. The album continues to sway between slow doom sludge and a mid-pace punk death snare. Final song ‘Frozen Styx’ see’s the return of the wahing bass which is underpinning a riff of utter doomly destruction, drop to your knees we have found a new sonic deity my friends.

Coffins sound like the one thing you’d never associate a band so principally embedded in the old school way of doing things, they sound fresh. No one plays Death Metal like this anymore, and for this reason it is so invigorating to finally hear Death Metal sounding like…well…. death again. It is a breath of malodorous air, an acrid sludge that we can all revel in. Fuck your hyper blast machine aided triggered drums, fuck your pro-tools guitar Malmsteen-wank-off and fuck your meaningless multi-word band name because Coffins represent what Death Metal is and always was. A dirty, messy, noisy expression of negativity, a true outsider’s art form.