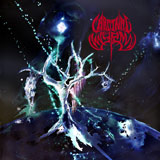 Cardinal Wyrm are a doom band based in Oakland, California. The current line up consists of Pranjal Tiwali on drum and vocal duties, Nathan Verril on guitars and Rachael Roomian on bass. This is their second full length album, initially an independent release on Bandcamp, but has now been picked up by the esteemed label Svart Records for a physical release.

Cardinal Wyrm, at their heart, are a traditional heavy-blues doom band, but draw from a broad palette of styles to create something unique. On the monolithic Dreams of Teeth, cavernous open string sludge riffs stab angularly through the layered, monastic choral vocals; a million miles away from the bombastic chorus hook of Born In A Barren Land. The phased guitar and bass tones present in the chilling intro of Leaves Of The Hanging Treeare reminiscent of John Carpenter soundtracks, while an ominous church organ dirge provides the backdrop to the reverential and conceptually magnificent Warden Of The Swans. The low, heaving tribal thump and shimmering, downright beautiful, three chord post-rock riff intro to I Am The Doorwaywouldn’t be out of place on a Mogwai record.The ‘freaky-deaky’, 70’s-throwback, organ driven riff of Cult Of The Coiled Spine recalls bands like The Doors and The Crazy World Of Arthur Brown. The album is hugely varied – at timesproperly ‘out there’ – yet feels coherent and self-assured.

Such musical variety requires a big voice to convince the listener to step forth into their mystical wormhole. Tiwali’s lyricism is superb. His vivid, depressive imagery wears the band’s vast, dramatic instrumentation like a shroud. The lyrics are cast through a prism of occultism, sci-fi lore and mysticism, which disguises their deeply introspective, sometimes confessional nature. This lofty lyrical style combined with his inimitable, quasi-Gregorian vocal delivery transcends the mortal man. So Tiwali plays the omniscient narrator of all the tragedies and horrors of the universe. It has been a long time since I have enjoyed poring over a lyric sheet as much.

The subject matter throughout is resolutely grandiose. Warden Of The Swans depicts great images of vast celestial swans that once swam on the lake of the universe, grotesque visions of bondage and human desolation drive Cult Of The Coiled Spine, and gloriously dark descriptions of time populate Leaves Of This Hanging Tree. By the time the impenetrable sonic mass of The Outlier comes crashing to its conclusion, you truly feel you have returned from a journey.

It is I Am The Doorwaywhich holds the most intrigue for this reviewer. Sampling the audio diary of a man cited as Godwinson Asquith Stanley, the lyrics read like ancient prophecy. Google away, you won’t find anything about this preposterously monikered man. The story goes that Tiwali was bequeathed a box by a stranger in an apartment building where he lived in a remote part of China. Discovered upon the man’s death, the box was labelled ‘for the fellow traveller in apartment 3.’ Contained within was an audio diary and a book called “Chronicles Of The Wyrm Mythos.” Written by Mr Stanley as he approached his final days, these hugely detailed documents describe the portal to the other side and something he calls the “Wyrm Mythos.” This is clearly reminiscent of H.P Lovecraft’s fantastical Cthulhu mythos, yet the story of the acquisition of the box is entirely true.

Rather than the soulless, click-track sterility of a pro-tools environment, the manner in which the album was recorded finds human textures in imperfections. Despite the operatic, otherworldly scope of the album, we are granted clear glimpses of a band in a groove, jamming on a riff. Black Hole Godsis a hugely ambitious, thoroughly entertaining body of work to rival anything that has been released this year. Imagine what they could do with a label backing them and a bigger budget.