Bretus are an Italian outfit from Catanzaro formed in 2000 by bassist/guitarist Ghenes. At the time of this EP the band also consisted of frontman Zagarus, Neurot – guitar (since departed) and drummer Sest (replaced by Stiges in 2012), present bassist Janos only joined last year and doesn’t feature. This EP from 2010 was the band’s first release and has been given the reissue treatment by the good folks over at The Swamp Records. Ghenes, Zagarus and Stiges would go onto form shamanic doom blues outfit Lunar Swamp whose excellent UnderMudBlues EP was reviewed by my Shaman colleague Rob Bryant earlier in the year.

The band cite their inspirations as old horror movies, H.P. Lovecraft, mysticism and 70s music which is certainly reflected in the EPs artwork, mysterious hooded figures dominating everywhere. First track Sitting On The Grave features a disturbing sample of a woman’s ear-piercing scream followed by a sort of incantation, I’m hazarding a guess as it is in Italian, but seeing as Bretus enjoy horror films, it would be a reasonably safe bet. The track then launches with a riff that reminds me of John Christ and is soon accompanied by Zagarus’ now trademark Danzig influenced vocals. I have to admit that having grown accustomed to the smooth blusier style of Lunar Swamp, the harsher vocal delivery (that one would usually find with sludge metal) took me a little by surprise. One of my main issues with sludge tends to be how monotonous the vocals (and music) sound, but here it works because it is alternated nicely with the more melodic sections.

From the South is a real headbanger, the music is gloriously over the top and there is a Manowar triumphant battle cry feel to it. Vocally there are shades of Phil Anselmo from around the time of Far Beyond Driven and The Great Southern Trendkill. This is the kind of track that I could easily see audiences punching their fists in the air to. Dark Cloaks Arrive is a pretty instrumental that allows for a quick breather and reminds me of the mellow folk pieces Embryo and Orchid from Black Sabbath’s Master Of Reality. I could imagine this being played as the prelude to some kind of gruesome druid sacrifice ala The Wickerman.

In Onirica has such a killer groove that it virtually swings, and if you took away the vocals, I hear Sonic Flower with the heavy 70s rock influences (Bang, Jersualem, Cactus and their like). This track is so steeped in the 70s that it should come with its own set of bellbottoms. The Only Truth at nearly seven minutes is the longest track on the EP and is packed full of chunky riffing, reminding me a bit of The Cult, especially vocally. If that band shifted into doom metal then they wouldn’t be a million miles away from this. A truly exuberant conclusion.

Comparisons may be drawn to Lunar Swamp and that’s a little inevitable seeing as how both bands share members. There are some amazing tunes on here, featuring some killer hooks and kickass grooves. If I were to state a preference than Lunar Swamp wins out, there is something uniquely beguiling about their approach that I don’t find here. As stated on my Lightmaker review, the doom/stoner scene is currently saturated with bands and you have to have a certain X Factor to really stand out. However, if you aren’t as fussy as me and want some downright solid Horror themed classic doom metal then this should doubtlessly be your first port of call. 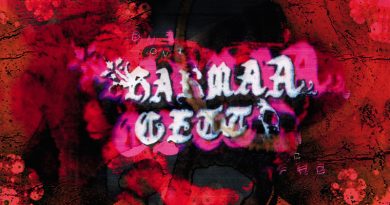