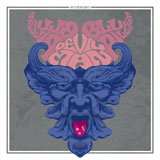 Guitarists always seem to be on a quest to find the perfect tone…spending hours trying out different guitars, amps, strings, pedals, valves…etc in an unending attempt to chase the elusive sound they hear only in their heads. Singers, on the other hand, pretty much have to deal with whatever nature has given them. Sure you can train a voice, strengthen it, learn to pitch…etc but ultimately it’s down to good old Mother Nature and how she decided to put your vocal chords together. Mother Nature was smiling to herself the day she put the vocal chords in Elin Larsson!

This 4 track EP from Blues Pills starts with a solitary Larsson baring her soul and spilling her guts and from the start it is a jaw dropping thing. Her rich, jazz inflected blues wail is imbued with a sense of emotion and gravitas that belies her young age. Comparisons to Janis Joplin will be inevitable but somewhat lazy…Larsson in many respects sounds little like Joplin having a richer, fuller tone if anything, but both front hard hitting blues rock bands and both are female…end of comparison.

That’s not to say the band are slouches either. The quartet of Larsson, guitarist Dorian Sorriaux, drummer Cory Berry and bassist Zack Anderson lock in together to create a sound that is steeped in rock history blending the primal, heavy blues of Peter Green era Fleetwood Mac with the burgeoning proto metal scene that closely followed them. Berry and Anderson lay down gigantic grooves while Sorriaux is particularly impressive throwing out riffs and slick, fluid lead runs with barely restrained abandon. The heavier tracks, ‘Devil Man’ and ‘Time Is Now’ are muscular slices of head shaking 70’s style rock that allow Larsson full reign of her impressive vocal range. The band all clearly relish the opportunity to cut loose and belt it out.

By juxtaposition the mellower tracks, ‘The River’ and ‘Dig In’ display a maturity and restraint that few bands are capable of achieving. Here Larsson sounds as though she is pulling out her heart and throwing it on the ground in front of us while the band hit a hypnotic groove. Once again Sorriaux impresses with his tasteful licks and a breath taking freak out to bring ‘Dig In’ to an exultant climax.

There are millions, and I think that’s a literal figure, of bands mining the late 60’s and early 70’s for their influence these days but I struggle to think of anyone who does it with the same authenticity, skill, passion, talent and sheer excitement as Blues Pills. Theirs is less a homage and more a band born out of time…and then there’s that voice…