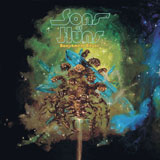 Since forming in 2009, Sons Of Huns have been hard at work fighting to get themselves to stand out from the rather competitive music scene of Portland, Oregon. After ceaselessly playing every conceivable sort of music venue for a few years, Peter Hughes (Vocals,Guitar), Shoki Tanabe (Bass) and Ryan Northrop (Drums) had been able to build up not only a great fanbase, but also a reputation for being a live act that promised not only great music, but great fun too. This reputation and hard work helped secure opening slots for bands like Red Fang, Andrew W.K. and Danava.

2011 saw the release of the self titled Sons Of Huns EP, followed hotly by a seven inch single and music video ‘Leaving Your Body’ that started opening the eyes of a wider audience. This year saw a payoff for them when they signed with EasyRider records and released their first full length album, ‘Banishment Ritual’. It’s not all been smooth sailing however, as this year also saw Shoki Tanabe leave the band to pursue the equally worthwhile dream of teaching English in Japan. Not to let that slow the momentum that the band have gained so far, they have recruited Aaron Powell (Belt Of Vapor) to fill the hole left by Shoki’s departure for the time being.

When you put on ‘Banishment Ritual’, the brief intro to the opening title track feels like a machine spinning up to speed before it takes off like a jet engine, and barely lets up for close to 45 minutes and 11 tracks. The first impression you might get from it is that is a simple, fast, frantic and above all, fun rock and roll album. You wouldn’t be wrong either. The stripped back and basic production gives the album an almost minimal feel. There are no fancy effects or studio tricks, just three guys getting together to simply play some music. And I think this is part of the charm with this album and it helps capture some of the energy that has become a hallmark of their live show. With this album you really feel that what you hear is what you get with this band. Tracks like ‘Horror In Clay’ and ‘I’m Your Dad’ perfectly demonstrate this; they both point at the finish line and just floor it, dragging you along with them whether you like it or not, while ‘Rollin The Dice’ is about as good a slice of blues rock as you are likely to get.

But despite this, simple is not a word that can really be used to describe Sons Of Huns. They have managed to bring together so many seemingly disparate aspects of so many different genres: The dreamy psychedelic midsection of ‘Argenteum Astrum’, the riffs and licks on ‘Planet No. 9’ that wouldn’t sound out of place on a Slayer album or the gentle interlude of ‘Waking Sleep’, with its clean guitar sound and a sleazy, laid back lounge feel. Although they have clearly a huge pool of influences, at no point does it sound like they are trying to cram too much into any of the tracks on the album, and there is nothing that immediately sticks out or feels out of place on the album. For all the different influences and nods of the head throughout ‘Banishment Ritual‘, Sons Of Huns have developed a distinctive sound of their own which keeps all those seemingly disparate elements tied together.

It is in the final two tracks of the album where I find that Sons Of Huns really shine. ‘Super Kanpai Rainbow’ starts with a clean and classical guitar intro that quickly switches to an overdriven fast pace while Hughes’ vocals range from a shriek to a growl. The fast and furious guitar playing and well timed vocal harmonies put me immediately in mind of some of the amazing punk sounds that emerged from the American west coast in the early eighties. But as quick as it arrives, it fades out to a slower and more thoughtful midsection with a lazy guitar solo that once again changes tempo to a more chugging climb towards the end of the track where it picks up more and more groove before the big rock ending, making you feel that you’ve been on much more of a journey than the 6 minutes of the track should really be able to take you. ‘Ouroboros’ closes the album in grand style. With huge guitar chords, sing along chorus, fast tempo and an inspired rock guitar solo that all combine towards the end to finish the album on a high, which leaves you in the dirt looking dishevelled and slightly bewildered in its wake.

With ‘Banishment Ritual’, Sons Of Huns have been able to prove exactly why they’ve risen head and shoulders above the fierce competition of their hometown, and have made it a firm declaration of intent. And I can’t help but think that they are one to keep your eyes out for as 2014 looms ahead.