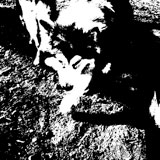 It would be remiss of us at The Shaman to only regale you with tales of the good and bad of contemporary rock music, at the expense of the vast expanse of sonic wonders that deserve your attention in other genres. Technically, this release is not totally unconnected to more typical Shaman fodder, in that it is solo work from the guitar wizard of New York’s Eidetic Seeing (top-notch psychedelic rock, one of my favourites of 2012).

In a sense, “Silence and Blue Notes” does exactly what it says on the tin – lonely, sparse guitar over silence as deliberately placed as the dissonant chords that Mirbeau works with. The result is a series of abstract musical paintings that occasionally lapse into disjointed melody. The opening and closing tracks actually reminded me of Dylan Carlson’s “Edward Kelley’s Blues” cassette from last year (and by association Neil Young’s astonishing “Dead Man” soundtrack), but whereas the erstwhile Earth guitarist’s sonic trip into the esoteric felt like a half-baked, misguided (if well intentioned) mess, these songs (and indeed the rest of this endearing album) feel focused and powerful, despite the chaotic “arrangements”. “Worried Notes” sounds like a less angular Albert Ayler, with its nod to dissonant blues, but “Mistake After Mistake” and “Blue Notes Gone Red” are more akin to being ragas of emptiness, with their droning notes and lingering atmosphere of sadness. The spirit of despondency and the awkwardness that permeates the whole album isn’t actually too far off the way the late Vic Chesnutt used to play – always at an angle to the universe, yet subtle and delicate.

The lo-fi, raw nature of what essentially sound like field recordings will doubtless put many people off, but to dismiss this splendid little gem on such grounds would be to misunderstand its very purpose. The listener is left with the impression that the songs are constantly on the brink of falling apart, which only adds to the fragile, morosely beautiful spirit of the whole album. It’s not for every taste, but for the open-minded (if slightly lugubrious) listener, this is perfect, delicate and bleak winter listening.