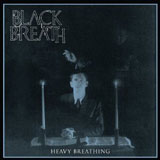 Smashing straight out of the speakers and grabbing the listener roughly by the throat, Black Breath show that they are NOT fucking around and they WILL bang that head that doesn’t bang. HARD. The perfect synthesis of dangerous, violent punk rock ala Poison Idea and swedish death metal ala early Dismember, Black Breath are like a rusty spike in the eardrum, and thank the (Southern) Lord for ’em.

‘Heavy Breathing’ is a full-on swede-style violent apocalypse, chock-full of the requisite chainsaw guitar sound made by booting a Boss HM-2 pedal through a crappy Peavey practice amp, the occasional At The Gates-style harmony part and rolling drums that just don’t let-up. BUT! Lest ye think this is yet another ATG-influenced (read – RIP OFF) metalcore band, THINK AGAIN BUSTER!! This is more VIOLENT Poison Idea, Dwarves and Motorhead-style, Entombed & Dismember , crust-inflected nastiness than it is wannabe-Slayer shred.

From the outset, ‘Black Sin (Spit on The Cross)’, Black Breath go for the throat again and again. ‘Eat The Witch’, ‘Escape From Death’, ‘Virus’, and ‘Fallen’ are all breathless rippers, Motorhead REALLY comes to the fore on the rockin’ ‘Children of The Horn’ , and there’s even a little bluesy rock ‘n’ roll feel to ‘Unholy Virgin’, carried along on an AC/DC-style bassline.

It’s not ALL face-ripping bludgeon ,though, as Black Breath have a skilful grasp of dynamics, shining through on the harmonized instrumental title track, ‘Heavy Breathing’ – a well-paced number with a thumping bass and snakey harmony guitar parts that builds to an ‘Am I Evil?’-sounding climax – and the dramatic doomy feel to the opening of album closer ‘Wewhocannotbenamed’.

The whole record, in fact, is well paced, with only one of the ten songs breaking the five-minute barrier – the rest weigh in at around three and a half to four minutes – meaning that nothing gets a chance to outstay it’s welcome, musically speaking. The whole shebang is done and dusted in under forty minutes, which makes a refreshing change in these days of 70 minute plus records. Black Breath know that it’s a GOOD thing to always leave your audience wanting more, and I don’t know about anyone else, but I sure as shit want to hear more, like, PRONTO!

Breaking the mould for Southern Lord, in that they are neither a doom band or a black metal band, Black Breath are a heavy breath of foul air, and one, it seems, that points the way toward where The Lord is pushing Southern Lord as a label. I have NO complaints following THIS li’l cracker. More please Mr Anderson!