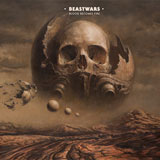 Dirtier than a ditch-diggers arse during the wet season and twice as uncouth, Kiwi barbarians Beastwars have returned to take a second crack at drinking the bar dry, setting fire to your beard  then smashing the place down around your ringing ears and let me tell you, they just about succeed!

Just when you thought nothing could be filthier than their debut, self-titled, album, Blood Becomes Fire comes along and knocks it into a half-cocked hat. Think: The Cult during a four-day meth and meths bender, or a royally fucked High On Fire and you’re in the same area as the gasoline-piss-and-molasses-swilling miscreants that comprise Beastwars at this point.

Drums are clubbed to within an inch of destruction, filth-encrusted bass rumbles and clanks, flamethrower guitars peel off drunken riffage, thunderous chug and occasional squeals of wah and all the while some kind of diseased ruminant bellows and howls like a deranged beast with a gob full of glue, rotgut and hot tarmac. God it’s beautiful.

The slurring, sozzled vocals of Matt Hyde could be a stumbling block for some but I defy anyone to get from opening track ‘Dune’ to closer ‘The Sleeper’ and come away not thinking he’s the perfect fit for this band of ‘orrible ‘erberts. Guitarist Clayton Hickey is no slouch in the drunken filth stakes himself – although coming in second to bassist James Woods (no, not that one) and his moss-and-slime-bedecked clanking bass thrum – knocking out scorching riffs that fall somewhere between Matt Pike’s hillbilly cousin and a totally monged-out Jes Steineger of Coalesce. Yessir, that’s SOME level of audio-muck right there.

With nary a poncy intro in earshot, ‘Dune’ kicks in with an aggressive one-two of gut-punching drum clubbing and burbling bass, Hyde howling away and Hickey keeping it no frills and nasty. Breaking into a loping groove, Hickey shapes the sound between wide and expansive and tight and claustrophobic, playing subtly with dynamics. Oddly enough, Beastwars do possess a deft sense of subtlety amidst the bludgeonous drubbing, showing it to great effect during the down-low verses of the early-Danzig-esque ‘Tower Of Skulls’, the hypno-psych mange of ‘Realms’ and closer ‘The Sleeper’ and the stripped-down epic ‘Rivermen’…..during which it hits me that Beastwars kinda remind me of cavemen attempting to play the greatest hits of The Cult and Danzig….which I mean in a good way. A very good way indeed.

What they have in common with such bands is the way they ebb and flow, cranking everything up to give a great-big fuck-off ROCK chorus. Of course, where they differ is in the fact that Beastwars play it like beered-up hairy-arsed louts, which is in some ways their strength – they never stray into the ‘cheese area’ that hairy-chested strutters like Danzig and Astbury do. Thank fuck.

Hickey isn’t afraid to hang back either, knowing that Woods’ bass rumble and clank can carry a track like ‘Ruins’ as effectively as his guitar can, and possibly more powerfully too, so amped up and lairy is his tone.

It’s the little things like this, things that come with intensive listening to Blood Becomes Fire, that go some way toward separating Beastwars from the pack and a long way toward elevating them too.

They may come off like knuckle-dragging Neanderthals, but there’s a serious amount of smarts buried beneath the grime. Diamonds in the rough indeed.

If you like your dirty-arse stoner rock to be more rock than stoner and to really have some hair on it, then you sure as shit won’t find anything with a dirtier arse and hairier swinging balls than Blood Becomes Fire.