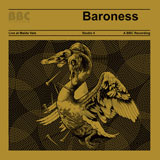 Here’s a little secret for you: Baroness are bloody brilliant. Whether it was that split with Unpersons or their trio of colour-themed records, the gorgeous Georgians have barely put a chord wrong. Unless you’re the curmudgeon sort, you can appreciate just what a streamlined beast they are on this BBC session. No messing, just four hairy men doing four tracks from last year’s opus ‘Green & Yellow’, and sounding damn fine with it.

Opening with ‘Take My Bones’ in typically pulse-pounding fashion, everything about contemporary Baroness is in play here: the heart-poppingly exciting gallop that takes you right to the front row, even if in reality it’s recorded in a box room somewhere with nary a sweaty punter in sight to egg them on. Not that it matters, ‘March To The Sea’ is still played with the gorgeous intensity as you would hope from veterans ploughing their way through a song that ranks as one of their very best, welding a titanic melody that should silence anyone who dares utter the phrase sell-outs. And even on a straight ‘live in the studio session’, it gets even better: ‘Cocainium’ on the album now sounds deflated by studio meddling for in the live environment it’s morphed into a majestic mid-pacer, with a finale that truly does justice to their intentions. And you’re right, ‘The Line Between’ does sound a little bit like Cave In circa ‘Antenna’-era, but let’s not take away from the fact it’s a damn good tune. But it’s the wrong tune to end this all on, when you just want them to keep going on and on. Even if they are in prime form, there’s much wailing and gnashing of teeth when you realise ‘Red Record’ and ‘Blue Record’ have fistfuls of other songs that would put a seal on this session.

Having said that, this is still a damn piece of Baroness action. The production is crisp as a midwinter morning and does great justice to what Baroness manage to achieve time and time again – the synergy between their sludge origins and their instinct for a good tune. As such, this BBC session captures them perfectly, just before that horrendous bus crash took them out of action. A full year later and now back as a touring outfit, this should serve as a perfect introduction to their brand of songwriting and the casual deftness with which they wield it.