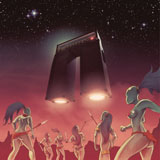 Imagine Cephalic Carnage playing the theme-tune to The Magic Roundabout. Or Tesseract jamming in an Early Learning Centre with a host of kids’ musical instruments. What about Between the Buried and Me starring as the latest characters on the next version of Super Mario Kart? And now meet the reality – meet Astrohenge.

Everyone’s favourite Camden-based, loony-tune heavy metal supremos have returned to provide us with the ever so curiously-titled ‘Astrohenge II’. Is there a progression away from the razorneck cheese-riffs, piano-backed instrumental wizardry and 11-year-old-sense of humour of their debut? Err, no. Is there a progression towards even meatier guitar leads, bolder tech metal dynamics, Euro-doom-pop keyboard contrasts and is Kieran Iles even better at annihilating the boundaries of conventional drums? Shit YES!

Apparently stepping into the concept record department for the first time, it’s actually the cover art which is the biggest point of reference for the bold and noble principles the band wish to convey this time around. A huge spaceship, shaped like three of the colossal ancient blocks of stone made famous by a certain other henge, and taking the form of an intergalactic amplifier, naturally, is presumably carrying the band to a mystical new planet (ahh, see what they did there: astro…henge!) The mystical planet in question just so happens to be populated solely by beautiful women clad in Viking battle attire, who flock to the astrohenge like hoardes of nymphomaniacal vixens on an overdue pilgrimage to Amsterdam. The ‘Henge don’t do realism, hell they clap their hands to their ears and run away shouting “LA-LA-LA-LA-LAA” at the very thought!

So what of the soundtrack to this picturesque holiday – I hear you cry?! In just 30 all-too-short minutes, our North London storytellers decapitate the rulebook of commonplace doom metal with a stunning display of virtuosity, riffs capable of shattering a whale’s pelvis and their trademark unnerving keyboard undertones making the whole thing sound like you’re on a carousel ride to oblivion.

After aptly-titled intro track ‘Goodbye’ Hugh Harvey and Matt Rozeik begin their never-ending guitar duel on ‘Space Honky’, essentially a speed metal track lost in a large branch of Toys R’ Us. Olly Weeks’ keys bounce off the steel toe-caps of Iles’ double-bass thunder on ‘Tomb of the Mummy’ and ‘Lab Chimp Uprising’ to end up sounding like Jon Lord jamming with Tomas Haåke in some weird late 70s pantomime orchestra pit. Although for the most part it’s difficult to separate Rozeik and Harvey’s interlocking tones, what is clear is that both have upped their game drastically and cut out any of the filler that may have resided on the debut album. Sure, the riffs are monster trucks of destruction, but there’s a amazing beauty to the 2-player harmonies on ‘Kid Psychic and the Sidekick Kick’ (try saying that after six Carlsbergs), marrying what sound like Bach string arrangements with Weeks’ organ work to present an eloquent piece of classical hymn.

‘Dead Man’s Goblets’ is a foreboding mid-album breather – think Enslaved playing in the lobby beyond the gates of Valhalla, and it’s almost as evil as this along with speedier follow-up ‘My Life, She Is Over’. ‘Ruined the Quest’ sees the guitarists locked into each other’s icy glare with a spider riff that would give Slayer an epileptic fit. The electronics swell like a static storm around Rozeik’s lead as Iles pounds through like a snowplough in Alaska. ‘Venusian Steel’ rips the blistering ‘Ruin’ riff right out of Lamb of God’s songbook, but couples it with some backstage coconut-shie-themed keyboard glories, plus hyper-speed blastbeats. The result is akin to the re-enactment of the ‘Everybody Wants to be a Cat’ scene in Walt Disney’s Aristocats, provided you replace the cats with leather clad, corpse-painted beardos blasting Burzum from boomboxes on their shoulders.

Closer ‘Hello’ (oh, the irony) sees Rozeik draft in AJ Cookson, the other half of his dark ambient alter ego Necro Deathmort, to provide a murky electronic smokescreen opening. Iles’ taps out a steady ride-cymbal as the gruesome twosome guitarists wipe the floor clean with a titanic and sluggish doom riff. This is easily the record’s heaviest moment as the ‘Henge crush their way through the aggressive and thonged throngs of Martian females, either to their merciless fates or some bizarre fetish awakening.

Normally it’s necessary to talk about how a group of musicians interact, complement each other and perform as a tight unit, but there’s nothing to add here especially if you have happened across this crazy mob of nursery grindcore freaks before. Astrohenge are beyond tight, in fact they are closed – there is no higher plane of ability, and they have proved their worth on this astonishingly brutal yet oddly beautiful CD. If you have yet to experience the ‘Henge live in the flesh, particularly at their spiritual home at The Unicorn in Camden, then I urge you to act fast to right your sorry mistakes. If the genre of Fairground Doom wasn’t secured by their debut, it certainly is now, long live the insane genius of Astrohenge!