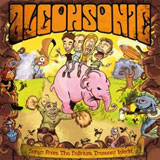 Being of Gallic blood myself I’m always keen to check out French bands and try to spread the love a little bit. Let’s face it, France has given the world so much…amazing food, astounding wine, fashion, beautiful women (Catherine Deneuve, Isabelle Adjani, Audrey Tatou…etc) but hasn’t really made much of an impact on the world stage when it comes to rock and roll. Most French rock, and the talent is certainly there, seems to remain pretty firmly trapped within the country’s borders with only the odd exception breaking the seal and making a bid for freedom. So it is when this disc landed I couldn’t wait to get my ears round it.

Looking past the impressive packaging (and it is extremely impressive in that quirky cartoon fashion so beloved of the French), and getting to the nitty gritty, do Alcohsonic deliver? The name suggests some sort of dirty, underworld rock and roll reeking of whiskey fumes and teetering on the brink of collapse and looking at the band’s list of influences that includes Sabbath, Rory Gallagher, Blackfoot, AC/DC, Aerosmith, Down, Free, Monster Magnet…etc things initially look promising. Press play though and the band’s claims to draw from the lineage of 70’s rock soon start to crumble. Yes, the influence is there, particularly in tracks like “Follow Me and I’ll Flee From You” and “You’re Not Rock and Roll” which bristle with some neat riffs and a nice groove but overall this album comes over as a throwback to early 90’s funk rock acts such as Extreme and with more than a nod to early Chilli peppers.

It’s certainly not a bad album…the songs are very well crafted, the playing is exemplary and the production is polished and punchy yet the band continuously fall back to funk rock clichés all too easily and lose the momentum they may build up when they do decide to riff it up a bit. Matters aren’t really helped by vocalist Sebastien’s nasally whine. Admittedly the guy can sing but his voice occupies that irritating spoilt brat area that Mike Patton indulged in on “The Real Thing”…the style that was aped by a million other singers in his wake.

Overall this is just all too polite to be fully convincing. Inside Alcohsonic lurks a potentially great dirty rock and roll band…and their Myspace page certainly hints that this is where they’d like to be…but to really hold their heads up they need a little more dirt under their finger nails, a little more grease on their jeans and a shit load more ROCK!!! That’s not rock…that’s ROCK!!! In capital letters with three exclamation marks minimum. For now though, this is a polite and cordial first introduction, like meeting your girlfriend’s parents. Maybe next time they’ll get rat arsed and let themselves down badly…in a good way!!!