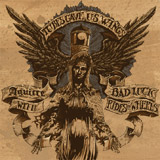 So soon after we covered their debut album, German bruisers Bad Luck Rides On Wheels have turned up again, like the bad pennies that they are, only this time with French no-goodniks Aguirre in tow, intent on delivering a ferocious one-two punch beatdown to the eardrums of all who happen across their path of devastation.

This time around the Bad Luck boys have assumed a decidedly deathlier hue with the three tracks that take up their half of the split – ‘Escape’ pushes Pierre Bernhardt’s thundering double-bass drums into decidedly ‘Floridian’ realms ala Bill Andrews circa Leprosy, and vocally things are definitely phlegm-drenched and deathly. Speaking of Death, the shadow of Evil Chuck most certainly hangs over proceedings herein and most notably makes itself known approximately four minutes and twenty seconds into the track as guitarists Rui Costa and Stephan Kurth let rip with a mighty riff that could have come straight from the man himself – high praise indeed.

Elsewhere those eastern-flavoured leads Schuldiner favoured so much also make a welcome appearance amidst the choppy riffing and doomy breakdowns, ultimately mutating into a guitar run that wouldn’t have been terribly out of place on an early Paradise Lost album.

Third and finally from BLROW is a somewhat surprising cover version – ‘War Machine’ by KISS. Yes, you read that right – KISS. Not being in any way familiar with KISS except in the most tangential way possible, I wouldn’t know exactly how faithful a cover this is, but I’m willing to bet that the original didn’t feature bestial duelling vocals, last eight minutes or contain anything in the way of serious heaviness at all – all of which feature here quite prominently. Surprising, yes, but also nicely done.

Over in the Aguirre camp, things are a little more straightforward. Very much preachers of the end-time message via the medium of Down To Earth Motherfucken Post-Amplification Blues, Aguirre have that bluesy, woozy, hazy throb that admirers of the more…uh…’relaxed’ side of Eyehategod know so well. Throw in a little early Cavity and a touch of Toadliquor and you’ll have a pretty good idea of what to expect from their tracks ’58’ and ‘Penitent’.

There’s a real looseness here that can shade into outright wonkiness – particularly on ’58’, when timing issues seem to play a part – but it all fits into the general scheme of things. Their cover contribution is also a little less surprising than BLROW’s mauling of KISS, with Aguirre choosing to cover ‘Like Weeds’ by crustcore legends His Hero Is Gone, and also unlike the Bad Luck boys they pretty much play it straight – if a little slower and less ferocious than HHIG themselves played it originally.

So THAT, in a nutshell, is IT – Two great bands playing very much two differing versions of heavy music, yet coming together to smash your ears in and wreck your speakers. I ask you, what more could you possibly ask for?