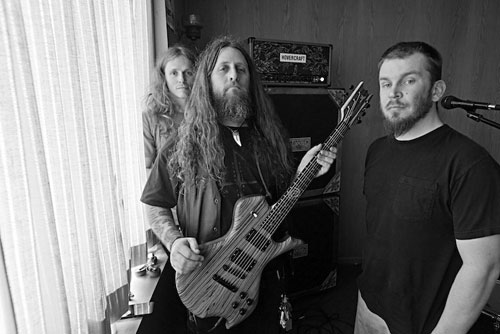 Oregon doomsmiths, YOB, will release their long-awaited full-length, the aptly titled Clearing The Path To Ascend, via Neurot Recordings this Autumn. Recorded at Gung Ho Studio in Eugene, notorious for its reserve of vintage equipment, alongside longtime collaborator/iconic sound-sage Billy Barnett, and mastered by Brad Boatright (Sleep, Beastmilk, Nails) at Audiosiege Engineering, Clearing The Path To Ascend is undoubtedly the crowning achievement for a band whose journey now nears two decades of creating music as commanding as it is cathartic.

As is the YOB way, the tracks here don’t simply offer a vacuous glimpse into the already riff-soaked doom genre. These songs demand the tandem attention of mind, body, and soul – etching a mark across a sound that finds YOB as formidable and unequaled as they’ve ever been. The path to ascend is clearly an arduous one, fraught with the peril of mediocrity. Thankfully, YOB pummels that path, climbing upward into a realm that sets the band in a heavy metal place that has been and will always remain wholly their own.

As a precursor to the release, YOB is offering up a second Clearing The Path To Ascend video teaser, produced by William F. Haldane of Solder House. Lose yourself below:

In related news, YOB will bring their otherworldly riff rituals to stages across the UK and Europe this Autumn, commencing on September 3rd, 2014 in Utrecht, Netherlands, the band will play in twenty-eight cities, the tour coming to a close on October 11th, 2014 at Desertfest in Antwerp, Belgium. YOB will be joined by PALLBEARER.

Clearing The Path To Ascend will be released on September 1st, 2014 in the UK and Europe and in the US on September 2nd, 2014 via Neurot Recordings.