“It’s Not Because Of You”, a brand new song from Swedish doom metal kings WITCHCRAFT, is available for streaming below. The track will be released digitally via iTunes as well as on limited seven-inch vinyl on Friday, August 17. The single will also include a special non-album cut called “Take Me With You When You Die”. The vinyl version will be issued in at least three different-color versions — black, copper and green — and made available via Nuclear Blast mailorder only.

“It’s Not Because Of You” comes off WITCHCRAFT‘s fourth album, “Legend”, which will be released on September 21 via the band’s new label home, Nuclear Blast Records. The follow-up to 2007’s “The Alchemist” was recorded with renowned producer Jens Bogren at Fascination Street Studios (KREATOR, OPETH, AMON AMARTH, PARADISE LOST, KATATONIA) in Örebro, Sweden. The CD marks the recording debut of the band’s new members Simon Solomon (guitar), Tom Jondelius (guitar) and Oscar Johansson (drums). Going forward, WITCHCRAFT leader Magnus Pelander will focus on his unique vocals without playing guitar anymore. 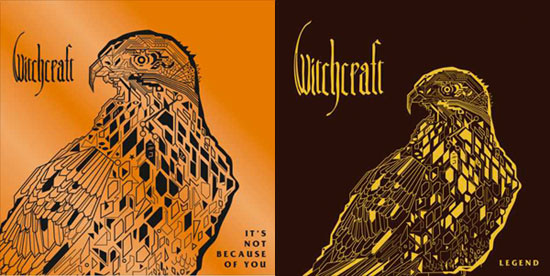 Commented Pelander: “A friend of mine had an idea about a cover for ‘Legend’. I developed the idea and gave it back to my friend who then passed it on to another friend who happened to be a designer. The designer then pushed it in a new direction. The result is already legendary.”

Added bass player Ola Henriksson: “The album cover is meant to reflect the music and I think it does that with its heavy, dark and clean design.”

WITCHCRAFT, who formed in 2000 in tribute to band heroes Roky Erickson and Bobby Liebling (PENTAGRAM), create heavy, blues-based rock augmented with touches of psychedelica and late ’60s pop flourishes. The quartet’s first-class songs reference the darker side of hard rock while remaining surprisingly accessible. Flying largely under the radar of the popular music landscape previously, WITCHCRAFT is a hallowed name in underground circles and has found itself championed by a diverse cross-section of distinguished music adherents including American actor Elijah Wood, who publicly called the band “amazing,” and DOWN frontman Philip Anselmo, who in 2009 proudly proclaimed WITCHCRAFT as his “new favorite band.”

Recorded 100% pro-tools and digital free at Stockholm’s UpandRunning studios with producer Tom Hakava and using only vintage amplification, WITCHCRAFT‘s latest album, “The Alchemist”, showcases a group of musicians at ease with their playing and songwriting. Addictive melodies flow simultaneously with catchy, heavy riffs, while maintaining a relaxed and laid back feel throughout. Among its many highlights, the album features the standout songs “Walk Between the Lines” and “Hey Doctor” as well as the record’s plat du jour, the three-part progressive rock odyssey of the title track “The Alchemist”.

Electric Moon To Bring Kosmische Improvisations To The Roadburn 2013 Afterburner