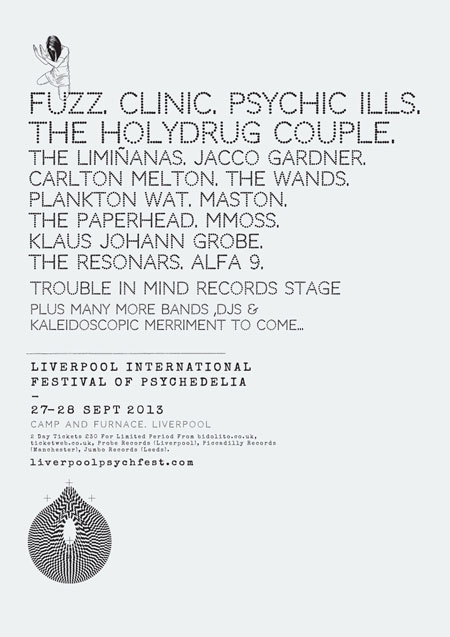 Liverpool International Festival Of Psychedelia and No Other Press & Publicity are thrilled to unveil the first round of artists at this year’s festival with FUZZ, Liverpool’s own masked-masqueraders CLINIC, New York City’s PSYCHIC ILLS, and Chilean space cadets THE HOLYDRUG COUPLE heading up the initial announcement.

The festival will also feature a stage curated by the stunningly consistent TROUBLE IN MIND RECORDS, who will be making the trip across the Atlantic from Chicago bringing a cohort of their artists along for the ride (including THE LIMIÑANAS (France), JACCO GARDNER (Netherlands), MASTON (USA), THE PAPERHEAD (USA), MMOSS (USA) and THE RESONARS (USA)), CARLTON MELTON (USA), THE WANDS (Denmark), PLANKTON WAT (USA), , KLAUS JOHANN GROBE (Switzerland) and ALFA 9 (UK) complete the first round of artists to be announced.

2013 will see the second instalment of Liverpool Psych Fest, an event which The Quietus labelled a “150 microgram hit” in 2012. Taking place on the 27th and 28th September, the 2013 event will be the UK’s largest celebration of psychedelic sub-culture, featuring music, art, film, performance and visuals from the cutting edge of today’s proponents of psych.

Recipients of critical clamour on both sides of the Pond already, FUZZ is the new project of ultra-prolific garage rock musician Ty Segall. Well on the way to becoming something of an underground legend with his seemingly non-stop release schedule, Segall issued three full-length albums under his own name last year, in addition to his on-going collaborations. This will be FUZZ’s first UK performance.

Completely brilliantly named, THE HOLYDRUG COUPLE count fellow Liverpool Psych Fest performers Psychic Ills as label-mates on the genre defining Sacred Bones Records and hail from Santiago, Chile. The titular “couple”, Ives Sepúlveda and Manuel Parra, turned heads with their 2011 debut LP Awe, and new LP Noctuary (put to tape in a home studio built by the duo who recorded the entire album themselves) has been greeted with exuberant press enthusiasm.

A band who need almost no introduction to patrons of Liverpool Psych Fest, our very own CLINIC have been pursuing their own individual course for the past decade and a half. A Grammy nomination, performing on The Late Show with David Letterman, high profile tours with fans such as The Flaming Lips, Radiohead and Arcade Fire, and buckets of reverence from artists both established and emerging have seen the band simultaneously flirt with the mainstream and become a cult proposition.

Trouble In Mind is a record label out of Chicago, IL, founded in 2009 by Bill & Lisa Roe. Starting out with the focus on the two and a half minute pop song, the label has grown and mutated into a reflection of the Roe’s ever-evolving tastes. In their brains it all makes sense and we couldn’t agree more. Releases from Ty Segall, The Fresh & Onlys, The Limiñanas, Night Beats, Mikal Cronin, Jacco Gardner et al, have positioned the label at the forefront of a blossoming global psych renaissance. The label will curate a stage at this year’s festival, featuring a selection of artists from their roster, ably oiled with the sounds of DJ Psyched Alex.