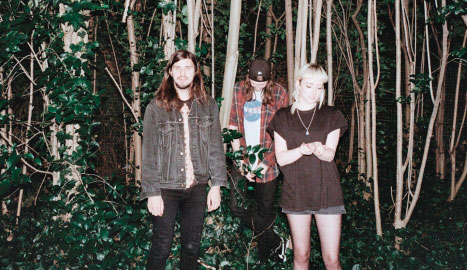 This London band’s ascension to the seat of power started out in 2011 and the immediate demand they created for themselves has enabled them to hone their sound at a diverse range of shows; everything from small underground gigs, to support for UK doominaries like Serpent Venom, to internationally renowned festivals. Throne’s remarkably self-assured debut release was the recent double a-sider “Heavy Lies The Crown / The Loser Must Bow” and on hearing it you’d be forgiven for thinking that they’ve been dealing out the doom for a lot longer than they have.

Together, singer/guitarist Nicos Livesey, bassist Will Michael and drummer Julia Owen summon the dense smog of 70′s doom riff worship with just that hint of shuffling swagger to keep the hips gyrating. It has been pointed out elsewhere that they have an unmistakably British sound. It’s true, Nicos’ soulful clean vocals see to that, along with a sonic assault which is slowly and deliberately drawn out from a classic tube-driven back line in thick layers of mesmerising groove.

Desertfest attendees looking forward to some doom casting it’s shadow over Camden will most definitely want to be front and center for Throne’s well deserved second Desertfest appearance, see you there!