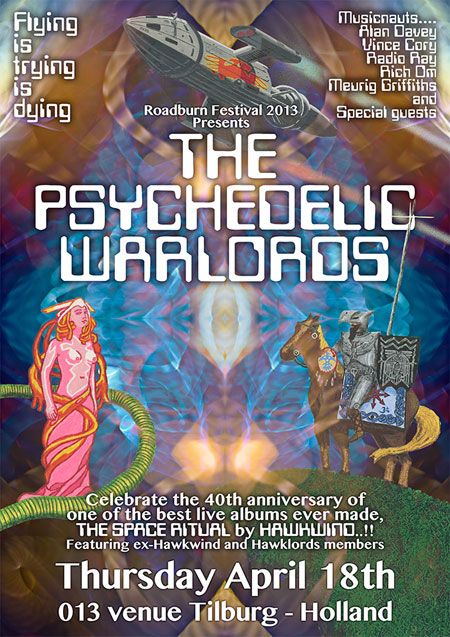 Roadburn are excited to announce that The Psychedelic Warlords, configured around Alan Davey, will celebrate the 40th anniversary of one of the best live albums ever made, Hawkwind‘s Space Ritual (released in 1973) at the 2013 Roadburn Festival on Thursday, April 18th at 013 venue in Tilburg, Holland.

From the archives of oblivion come The Psychedelic Warlords, and they will play Space Ritual from beginning to end for the first time ever on the European mainland at Roadburn 2013. Great effort has been taken to re-produce the exact sounds of all the instruments from Space Ritual to achieve sonic authenticity and re-create (as close as possible), the genre- and brain-imploding classic in its entirety.

“For me this is my favourite Hawkwind album”, says Alan Davey, “So I’m taking great pride in recreating this show to take fans of psychedelic rock back in time for an experience they will never forget.”

Now all Roadburn 2013 attendees will get to experience that golden era of Hawkwind‘s history, and hear in person the classic Space Ritual — many for their first time. A celebration of space, time and psychedelic luminosity with Alan Davey, Vince Cory, Meurig Griffiths, Radio Ray, Rich Om and special guests, this will be something truly special.  Time we left, born to go.