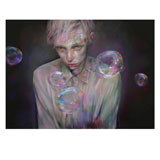 Trying to even remotely predict what Japanese psych/drone/doom/pop mentalists Boris will do next is a task akin to fire-toasting marshmallows on the surface of Neptune. Even that said however, their latest collaboration with Bristol-based singer-songwriter Joe Volk still remains an unlikely one. After befriending the former Gonga and Crippled Black Phoenix vocalist at an ATP event in 2007, the vastly experienced pioneers of Eastern heavy psych asked Volk to accompany them on some high-profile UK tour dates in 2011. In turn, this mutual respect for each others’ work has led to the release of a short split LP between two acts who, whilst possessing differing sound approaches, maintain the same desire to do something out of the ordinary.

Boris take on Side A with a track series entitled ‘Cosmos’ which is split into three movements. Pt.I is a simplistic wash of cymbals and esoteric rhythms, which forms the calm before the storm that is Pt.II. Showcasing the poppier side of their metallic might, the second movement has a soothing opening but quickly explodes into a Deftones-meets-Dir En Grey surge of bonkers rhythms and crunching down-tuned riffs. Takeshi’s soaring vocals straddle the top of the mix, coming across like Thom Yorke in a blender as Atsuo’s drums finally steady and plod the track to its conclusion. This is not the heaviest Boris have ever been on the likes of ‘Amplifier Worship’ or ‘Feedbacker’, but some of the inverted samples and background mystics make this genuinely disturbing noise-rock listen. Pt.III features a second shower of swirling electronic calm, which still retains an unnerving edge behind its peaceful abandon. If you liked ‘Smile’ or ‘Pink’, then this is the Boris you can probably relate to best.

Joe Volk kicks in on the flip-side with the violin-led ‘Call to Sun’. His guitar gently strums and twangs as his soulful vocals reach out into your inner consciousness. Gentle percussion dances around the track, which still feels upbeat, despite its sombre leanings. Drums kick into the mix mid-way through to make this feel far more spiritual than a simple acoustic ditty. ‘Finland’ does indeed have a feel of the icy planes of Northern Scandinavia as Volk delicately picks through an entirely instrumental pasture and subtly dallies across the fretboard to a simple sliding chord finale. It may not be mind-changing musicality, but Volk’s intricate charm is a delightful juxtaposition to Boris’ experimental madness.

I’ll admit that this isn’t the most essential of Boris’ releases, but if you’re a fan of Joe Volk’s acoustic tales or are simply looking for something a little away from mainstream patter, then this split could easily pull you into its intriguing spell.