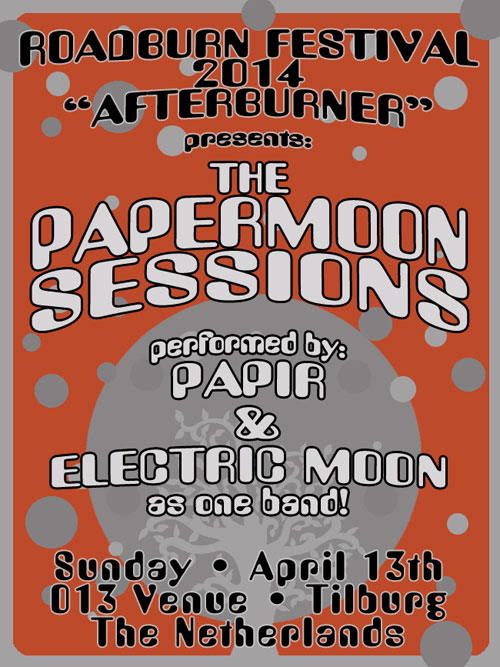 Walter & Co are thrilled to announce that two of the most fascinating European improv / psychedelic bands, Papir (DK) and Electric Moon (DE), will bring their tranced-out psych kraut exclusively to Roadburn 2014, channelling their mysterious cosmic vibes in The Papermoon Sessions as part of the Afterburner on Sunday, April 13th at the 013 venue in Tilburg, The Netherlands.

The bands spontaneously recorded The Papermoon Sessions at Denmark’s Dragens Hule with Mogens Deenfort Pedersen on August 9th, 2012. The S/T album will be released on October 25th on Dave Schmidt‘s Sulatron records.

Led by Sula Bassana‘s (Dave Schmidt‘s) fuzzed-out, heavy guitar explorations, Electric Moon weave pure-psychedelia, dub, doom, krautrock and drone into kosmische improvisations via a myriad of intergalactic riffs, stellar effects and deep-space transmissions. The overall vibe of their epic but hypnotic freak-outs can be utterly mesmerizing or darker than the depths of the most monstrous of black holes, but all the while remaining deeply psychedelic.

Sounding vital and fresh, Papir‘s cutting-edge take on psychedelica doesn’t hark back to a bygone era, but voyages through lush valleys of atmospheric soundscapes into peaks of wah wah driven, explosive guitar solos, all propelled by jazz-inflicted motorik grooves that serve to give the louder parts more impact.

The band’s use of balance and structure, freedom and power, heaviness and laid back atmospheres comes to full fruition on their latest album, the terrific III, out on Causa Sui‘s adventurous El Paraiso label, and puts Papir squarely in the vanguard of the booming European psychedelic rock scene, along with Electric Moon.

Papir will bring their own extraordinary type of semi-improvised psychedelic rock to Roadburn  Festival 2014 on Saturday, April 12th at the 013 venue.

Backed by a full band – Komet Lulu (bass), Marcus Schnitzler (The Spacelords, Electric Moon / drums),  Rainer Neeff (The Pancakes, Zone Six, Krautzone / guitar) –  Sula Bassana (guitar / synthesizers) will propel us through hyperspace, taking us on an utterly absorbing and surreal journey into the captivating and colorful sounds of the cosmos at Het Patronaat on Friday, April 11th (please note the date change).