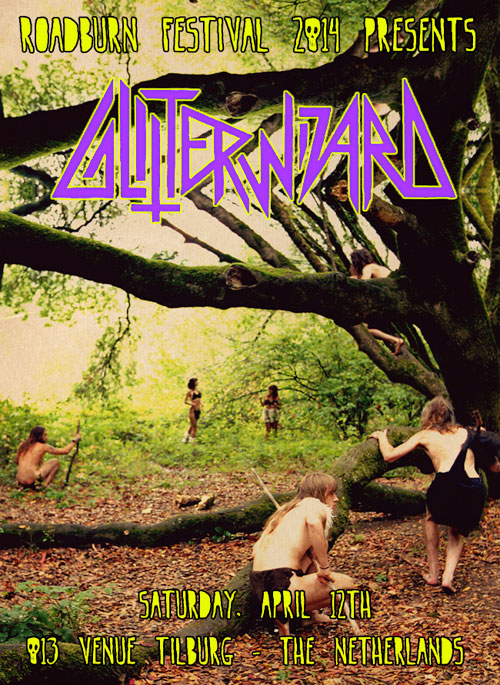 In Roadburn’s ongoing quest to exhume every artifact of 60s and 70s proto metal, they recently stumbled up on San Francisco’s Glitter Wizard. For a moment, it seemed that they unearthed a forgotten gem, as Hunting Gatherers, the band’s sophomore album, could be easily mistaken for a long lost album from the early 70s.

In their hazy minds’ imagination, the band shared the stage with Steppenwolf, Bloodrock, Black Widow, The Stooges or Iron Butterfly, but Glitter Wizard‘s trippy, swinging sound — replete with catchy riffs, amusing lyrics and space-age keyboards, sax and flutes — isn’t some kind of Nuggets discovery, they are here and now.

Here’s a band that manages to combine the aforementioned influences in new ways as their space-glitter-glam-blues-garage-psych-sound is created from old elements, but combined into something so decidedly different, that it leaves their proto-metal roots far behind.

All their songs sport a slightly different take on glam-rock, but it is clear that this is a band that loves to jam in the garage on a Saturday night, extending their glam into prog and space rock jams, before they rockingly traverse the riff-filled land with bong in hand, planting riffs in minds as they go along.

Don’t get behind the times when the devil worships Glitter Wizard at Roadburn 2014 on Saturday, April 12 at the 013 venue in Tilburg, The Netherlands. They will take you into future through a doorway hidden in the past.