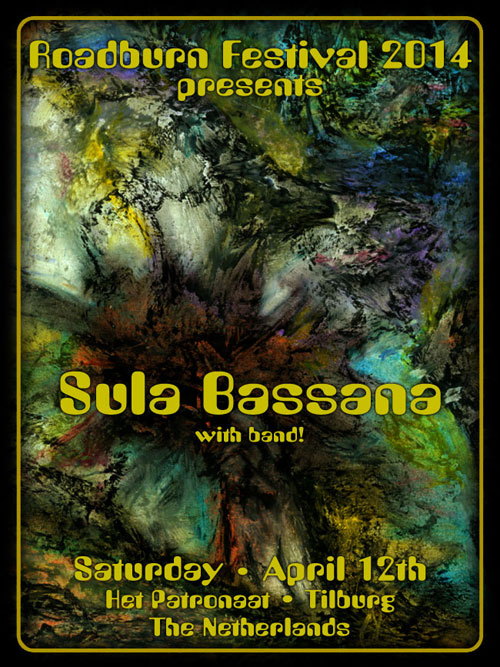 During recent editions of the Roadburn Festival, Dave Schmidt aka Sula Bassana graced the stage with Electric Moon to explore an unknown distant psych galaxy through hallucinatory spacerock. Roadburn HQ are drawn to his mesmerizing music like a swarm of tripped-out moths to a flame. Whether he is jamming with Weltraumstaunen, Liquid Visions, Krautzone, Sudstern 44, Zone Six, Interkosmos or Electric Moon, there is simply no one who can channel the krautrock vibe like Schmidt.

Over the last decade, the ever-prolific Schmidt also released several highly acclaimed solo albums as Sula Bassana. Dreamer, Kosmonauts, The Night, and Dark Days are among our favorites. The kosmische improvisations featuring a whirlwind of synths, deep space transmissions, experimental, ambient soundscapes, hypnotic rhythm elements and intergalactic guitar explorations beautifully capture what is happening in the heavy psych underground scene in Europe. In fact, Schmidt has played a pivotal role in the booming heavy psych and krautrock scene, inspiring quite a few European improv-bands and small labels with his Sulatron imprint along the way.

Schmidt and his myriad bands are well-known for their fantastic far out live performances, but Sula Bassana shows have been a rare occurrence indeed, never mind performances with a full band under his solo moniker. As you can imagine, Walter & Co are elated to announce that Dave Schmidt has agreed to play Roadburn Festival 2014 exclusively as Sula Bassana on Saturday, April 12th in Het Patronaat in Tilburg, The Netherlands.

Backed by a full band – Komet Lulu (bass),  Marcus Schnitzler (The Spacelords, Electric Moon / drums),  Rainer Neeff (The Pancakes, Zone Six, Krautzone / guitar) –  Sula Bassana (guitar / synthesizers) will propel us through hyperspace, taking us on an utterly absorbing and surreal journey into the captivating and colorful sounds of the cosmos.