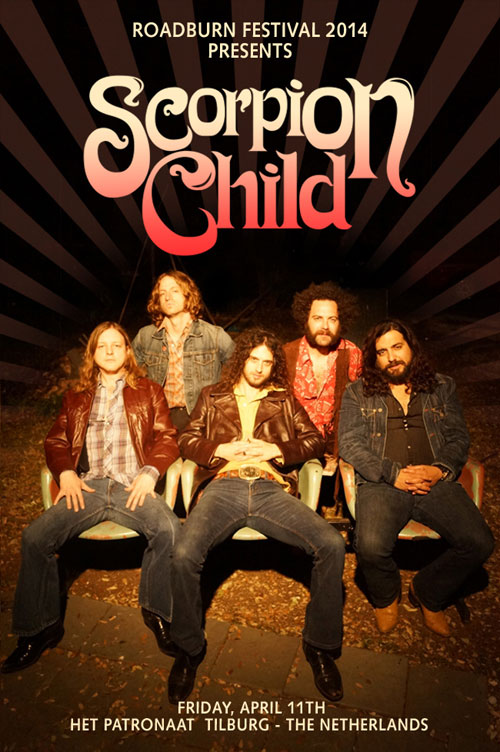 Vintage proto-metal lovers rejoice! Scorpion Child, hailing from Austin, Texas, will bring their killer heavy rock to Roadburn Festival 2014 on Friday, April 11th at Het Patronaat in Tilburg, The Netherlands. With their blues and krautrock-influenced heavy psych rock, the band fits right in with the likes of Graveyard, Kadavar and Witchcraft, while adding their own twist to the good times, good vibes and catchy hooks found on the great records of the 1970s.

Scorpion Child‘s self-titled debut (out on Nuclear Blast) is bound to prompt comparisons to Led Zeppelin at times; singer Aryn Jonathan Black does a pretty mean Robert Plant-worthy yowl. The spirit of Pentagram, Hairy Chapter and Lucifer’s Friend are palpable, too. We might even hear some 80s Sunset Strip swagger backing the muscular grooves, catchy choruses and soaring melodies.

The first single ‘Polygon of Eyes’ and other standout tracks including the psychotropic freakout ‘Secret Spot’ and the second single ‘Liquor’ all provide compelling evidence that these guys know their classics and have a very special sound all their own.

When it comes to straight up, kickass hardrock, Scorpion Child delivers! Do yourself a favor and don’t miss ‘em at Roadburn 2014.