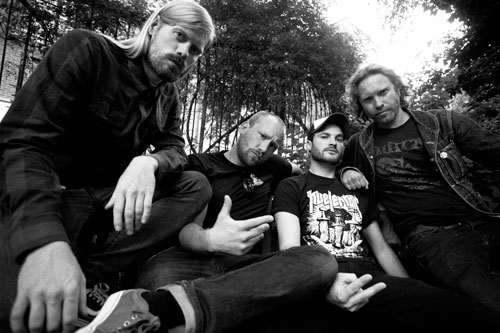 In exactly two weeks, London’s hottest stoner outfit STEAK will hit the California desert to record their first full-length, due out this fall on Napalm Records. Turn on the generators…

After two critically acclaimed EPs Disastronaught and Corned Beef Colossus and a series of successful gigs across Spain, France, Switzerland and England, the fuzzy foursome is packing up and heading to SoCal to record what will be an authentic desert rock full-length. The album will be recorded at Thunder Underground Studios in Palm Springs, produced by Harper Hug (Vista Chino, Yawning Man, Brant Bjork) and co-produced by Arthur Seay (from Unida and House Of Broken Promises). STEAK‘s debut effort is due out this fall on Napalm Records.

Within two years, STEAK have established themselves as “one of the British heavy rock scene’s most satisfying acts” (The Obelisk). Following the sandy steps of their American elders Kyuss or Fu Manchu, their music is driven by frantic riffs and contagious grooves, tinged with moments of pure cosmic escapism. Exploiting sci-fi and comics imagery (each record being wrapped in fantastic artwork by DC Comics artist Eduardo Ferigato), STEAK‘s vibe is nothing but gutsy and lively: it’s no coincidence if the band already shared stages with the likes of Monster Magnet, Lowrider and Dozer.

Here’s an enthusiastic statement about the upcoming journey, from STEAK‘s riffmaker in chief Reece: “With the help from some desert rock legends, this album is going to be bigger and more badass than anything we have done before. We just need to make it out of Vegas alive! Thanks to Napalm Records, we have been able to take the time to create some of the best tracks to date and let them evolve naturally. Having two weeks in the studio will be a total contrast to the short time we had to record the first EPs, and will hopefully show through on the end product.”

More infos about the album will be given in due time, but for now, make sure to check out STEAK‘s Facebook page to get all the meaty updates.