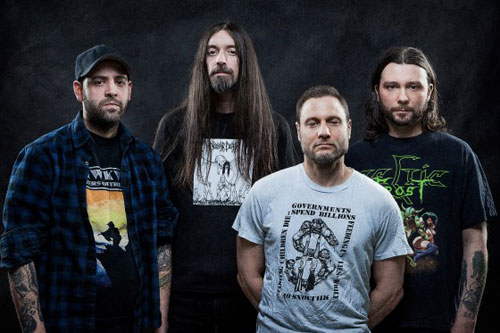 Relapse Records has just released the first single to be released from the second LP from NYC morbid sludge metal kingpins, SERPENTINE PATH.

The highly anticipated follow-up to SERPENTINE PATH’s self-titled 2012 debut, Emanations is the band’s first studio venture featuring new second guitarist Stephen Flam, the mastermind behind NYC doom/death legends, Winter — aligned with founding members Tim Bagshaw (ex-Ramesses, ex-Electric Wizard) and a triad of ex-Unearthly Trance members, bassist Jay Newman, drummer Darren Verni and vocalist Ryan Lipynsky (The Howling Wind). Capturing forty-five minutes of true sludge punishment from this true underground all-star team, Emanations was recorded by Newman, as with their debut, after which it was mastered at Audiosiege, the album dredging forth the band’s most demoralizing and anguish-filled slow-motion chaos yet, and fittingly enshrouded by striking artwork by in-house Relapse artist Orion Landau.

‘Disfigured Colossus‘ is the fourth of Emanations’ seven grueling tracks, and has been released in several methods of dispersal, now playing below as well as on YouTube and Soundcloud.

Emanations will see release through Relapse Records on May 27th, 2014 on CD, LP and digital formats; preorders for the album can be placed HERE, and via iTunes HERE.

Modern Doom Trailblazers Yob To Headline Roadburn 2014 Afterburner; Playing The Great Cessation At The 2014 Festival, Too!