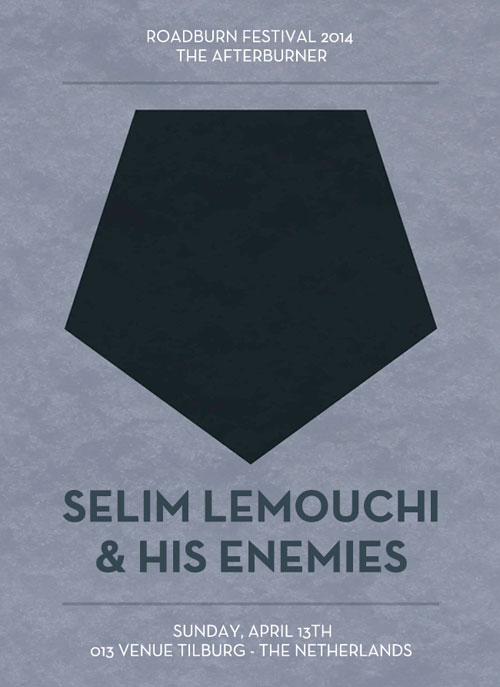 Selim Lemouchi & His Enemies will play the 2014 Roadburn Festival Afterburner on Sunday, April 13th at the 013 venue in Tilburg, The Netherlands. Selim and his motley crew of assorted enemies will take to the main stage for a special show.

Selim was scheduled to perform at the 2012 and 2013 editions of Roadburn, but fate had other ideas both times, with The Devil’s Blood disbanding just a couple of months before the 2013 festival took place. Now, Selim will be making his overdue appearance in Tilburg with his new band, Selim Lemouchi & His Enemies.

Selim comments: “I am very glad to be a part of this festival again. Walter has given me another chance to present my works to a broader audience and I am grateful. I have plans to put together quite the performance with many of my Enemies…”

As long time avid fans and admirers of Selim‘s musical endeavours, Roadburn HQ are extremely excited about the upcoming release of Earth Air Spirit Fire Water, the debut full length album from Selim Lemouchi & His Enemies. The album is the coming together of many minds and many ideas; four drummers, multiple vocalists, including the indomitable Farida Lemouchi, plus several other contributing instrumentalists.

Earth Air Spirit Fire Water is among the top Roadburn-related albums of the year, and the live performance of these tracks will be unmissable come April.

A video for the track Eschaton, taken from an earlier release, has been débuted today. Selim added some insight to it’s origins: “Jérôme Siegelaer came up with this one. We went back to the place where photography was done for the Mens Animus Corpus cover and I took off my clothes for another swim. The video itself was later edited, I say later as it did take us all summer and autumn to get it finished, the reason for coming this late with it and not releasing it before this time is simple; we had no time. But for what it’s worth, here it is”

Selim Lemouchi & His Enemies will perform at a special album launch show on December 7th in Eindhoven at the Temporary Arts Centre.

Earth Air Spirit Fire Water is available to stream in its entirety down below, courtesy of Vpro 3voor12 at THIS LOCATION.

MEGALODOOM: ‘Indiana Jones And The Temple Of Grief’ Gets Limited Cassette Release