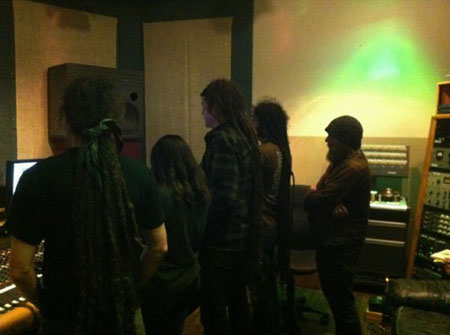 After nearly four years without a new release, ambidextrous sludge purveyors SAMOTHRACE were in Soundhouse Studios in their hometown of Seattle with producer Brandon Fitzsimmons (ex-Wormwood) to being the recording of their second LP.

SAMOTHRACE issued the following collective statement about the recording process: “Working on this album at Soundhouse Studios with Brandon Fitzsimmons is amazing. We were fortunate enough to use the Rolls Royce of analog tape machines. The sound of rolling thunder was an inspiration during the whole process. The songs are as soaring and turbulent as the last album, but a bit more mature. We can’t wait for its release and imminent touring to follow.”

The LP will tentatively bear two side-long tracks, “When We Emerged” and “A Horse Of Our Own.” The hymn “When We Emerged” originally appeared on the band’s 2007 demo in a much shorter and raw form, and has here been completely reworked and extended into a new song.

The album — its title still TBA — will be released by mid-2012 via 20 Buck Spin, who also released SAMOTHRACE‘s praised 2008 debut full-length, Life’s Trade. More info on the new album will be available in the coming weeks.

Check out video footage below of the band performing some of their new material live this past Summer.