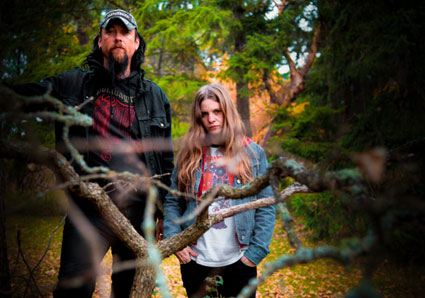 POMBAGIRA have now recorded their fifth album simply entitled Volume V at Dave Anderson’s Foel Studio. Volume V showcases the band as having dramatically evolved beyond the strict confines of doom by incorporating a psychedelic acid rock approach.  As always the album features heavier guitars than a paisley patterned asteroid colliding with the earth; however where this truly differs are on the massive psych explorations coursing through their compositions. Iconoclast Dream certainly inferred this was the broken path they would take, but no one will be able to anticipate the true majesty of their compositions until they hear them. Drawing on their lifelong love of bands such as early Camel, Caravan, Pink Floyd, and Amon Duul II they have managed to open up a new portal for musical exploration.

In total, five songs were recorded for the album, although these will only be available on the Limited Edition Double Album which comes in a presentation box package. The regular release will comprise of two songs, both Grave Cardinal and The Gift to Transgress are approx. 20 mins each. For the limited version the band reveal what will be regarded as probably their most adventurous escapade into Amon Duul II territory with the evocatively titled track Maleficia Lamiah. The last two tracks are short in comparison, the first track Black Sun White Light appears as the bastard acid hazed son to “Green Onions” while the final slightly quicker track is a cover of a Norwegian 60s freakbeat band.

POMBAGIRA’s Volume V promises to push the band into the light of acknowledgement, and although the band have not played a show in 2012 so far, the time spent to concentrate on writing the perfect follow up to Iconoclast Dream has proven very beneficial.

However there is more work to be done to this album and over the course of the next month, more vocals and guitar overdubs will be taking place at Earthworks in London which was originally owned by the Edgar Broughton Band. Mixing will occur across August. This album will once again be released by the band’s label Black Axis Records and should be available by late October early November 2012.”